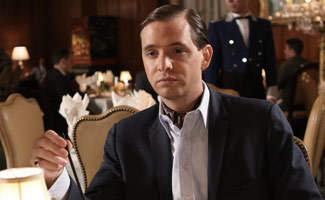 Aaron Stanford, who plays the foolhardy Horace Cook, Jr. (a.k.a. Ho-Ho) on Mad Men, talks to AMCtv.com about the importance of ignoring reality and his secret to success in life.

Q: Can you relate to your character having a dream that everyone else finds foolish?

A: I can’t say I relate to Ho-Ho on that level, but there are certain things about the character that you can relate to in the scene where he is having dinner with Don Draper and Pete. He reveals that the entire reason he wants to do this is to impress his father. That’s a very humanizing moment.

Q: Had you ever heard of jai alai before?

A: The only thing I knew about jai alai is that somebody was playing it in the opening sequence of Miami Vice. There is one shot of a dude whipping a ball with one of those hooks they use. I think the place it was biggest was in Miami.

Q: Did anyone ever tell you that you were crazy for pursuing an acting career?

A: I was always incredibly negative about it. My life has been the antithesis of that book The Secret. I’ve always been interested in doing what I do. I love storytelling and I really enjoyed acting but it never seemed like a realistic thing. So I always told myself, “Don’t get your hopes up. You won’t be able to do this for a living,” and despite all the negativity, for some reason I just kept pursuing it. I got out of school and moved to New York and told myself, “Well, don’t expect anything, but enjoy yourself.” Luckily, things fell into place.

Q: So if you were having to sell someone on the success of the game and they said it wasn’t going to work–

A: I’d tell them they were probably right. And then I’d just keep doing what I was doing.

Q: What did you enjoy the most about being on Mad Men?

A: I’m a huge fan, so just being able to be a part of the show was pretty huge for me. One of the things that I enjoyed the most, oddly, was just walking around the set of the office. I had watched the whole first season and the office set is completely intact and painstakingly outfitted to the last detail, like the pencils on these people’s desks are period pencils. [Laughs] Just being able to walk walk over to Don Draper’s office, open the door, peek inside, close it and walk down the hall to Pete’s and open the door and look inside — that was a lot of fun for me.

Click here to read an interview with Vincent Kartheiser, who plays Pete Campbell.