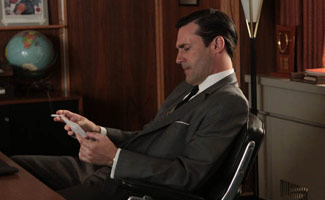 This week the Paparazzi snap shots of Jon Hamm’s new beard, Mad Men is credited as a major factor contributing to Netflix’s increasing popularity and digital designers have fun re-styling a Sterling Cooper Draper Pryce logo to mimic those of actual ad agencies.

• Celebuzz has photos of Jon Hamm‘s “sexy stubble,” on display at a recent Lakers game.

• In its report on the website’s subscription boom, Cnet credits Netflix’s “licensing [of] popular and critically acclaimed shows such as ‘Mad Men’” as helping to bump numbers higher.