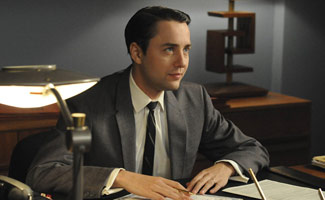 Mad Men has pulled in a few more off-season award nominations, while the show’s creator Matthew Weiner makes the 2011 TIME 100 list and actor Vincent Kartheiser (Pete Campbell) recalls his life as a child actor. Read on for more.

• TIME magazine lists Matthew Weiner as one of its 2011 TIME 100 most influential people in the world in an article that calls the Mad Men creator “no less than a genius.”

• On twincities.com, Vincent Kartheiser talks about getting recognized on the street as Pete and reveals the moment he knew he wanted to act professionally.

• Actor Eric Ladin, who played Betty’s brother William on Mad Men is now getting further attention for his role on AMC’s The Killing. Catch interviers with the actor at the Houston Chronicle as well as USC’s Daily Trojan.