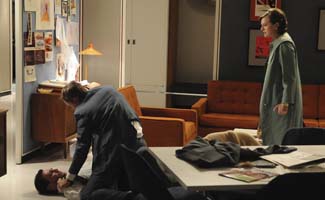 • Mark Moses on fighting:
“The more choreographed [the fight], the easier it actually is because [of] the wrestling, scraping, tossing, sloppiness — to make it look real tends to be harder to do because you don’t have as many succinct moves.”

• January Jones on slapping Kiernan Shipka:
“[Kiernan Shipka]’s a very professional young actress and she goes for it. We had a stunt coordinator there so everything was done very safely, but I do have to make contact to make it look real.”

• Randee Heller on Miss Blankenship’s makeup:
“When they first made me up I said, ‘My god, she looks like she’s well into her 70s.'”

• Robert Morse on Jon Hamm’s acting:
“I’ve seen a lot of movies and a lot of TV and a lot of actors play drunk scenes, but I have never seen one as brilliant as Jon Hamm did in that episode.”

• Mark Moses on giving a drunk speech:
“Initially [Matthew Weiner] wanted [Duck] to be just kind of stand-up drunk and pretty literate … but it didn’t come off quite as drunk as we wanted. So we went back and forth with the levels of how drunk he was.”