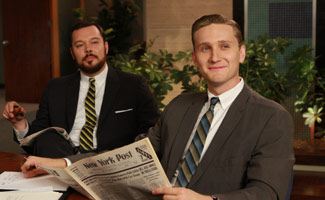 Aaron Staton channels a “Terminator-like” lawyer on CBS, while The LA Times speculates on whether Mad Men will experience a pantsuit revolution. Fashion is at the fore this week with additional reports on January Jones in Versace’s spring line and Mad Men‘s influence on menswear. Read on for more!

• TV
Guide reports that Aaron Staton will guest star on CBS’s The Good Wife
in an episode airing this coming May.

• The Los Angeles Times takes a look at where Mad Men fashion could be headed as the late 1960’s begin to replace sheaths with miniskirts.

• Rounding out this week’s fashion news, The
Detroit Free Press mentions Mad Men in an article about the return of men’s hats.

• Based on the AMC show’s wide critical and commercial success, Variety calls the new
network TV series Pan-Am and Playboy part of “a Mad Men
effect” on television.

• Mad Men is mentioned in a CTV News article about AMC’s new show The
Killing as the network’s first original drama series.