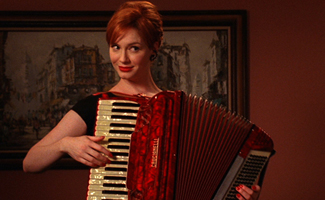 Christina Hendricks steals the spotlight this week with both a Vivienne Westwood campaign and a guest spot on Top Chef Masters. Meanwhile, Alison Brie scores a role in a new Judd Apatow film. Read on for more!

• EW.com reports that Christina Hendricks will be a celebrity judge on an episode featuring ’60s-era food on next season’s Top Chef Masters.

• In addition to her roles on Mad Men and NBC’s Community, Variety reports that Alison Brie will join Jason Segel and Emily Blunt in the upcoming movie Five-Year Engagement.

• Sys-Con Media reports that the Mad Men: A Musical Companion will feature 2 discs of popular music from show’s time period and is slated for release the same day as the Season 4 DVDs (Mar. 29).

• In an interview with Santa Cruz News, Tiffany White, (who dresses the background characters for the show) says of her process: “I try to think, ‘Who is this woman? Is she married? Is she rich? Is she poor? Is she out on a date?'”

• BSCreview.com wonders if AMC’s new show The Killing will live up to the standard Mad Men has set for the network.

• Mercury News cites Mad Men as an example of a successful scripted cable series in an article about A&E’s new show Breakout Kings.