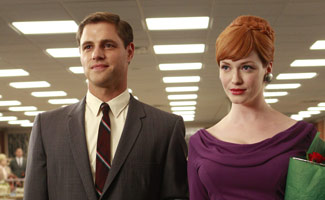 In the news this week, Christina Hendricks launches her movie career into the air, costume designer Janie Bryant dishes on her favorite articles of clothing and Rich Sommer joins the CIA. Read on for more!

• Christina Hendricks joins Brendan Fraser, Julia Stiles and Matt Dillon in a new film entitled Seconds Of Pleasure. According to screenjunkies.com, the entire movie will take place on an airplane!

• TVLine reports that Mad Men‘s Rich Sommer will be spending some time on the CW network’s Nikita this summer as an “electrical engineer and CIA consultant who comes to Nikita’s aid near the end of the action-drama’s freshman season.”

• An article in The Philadelphia Inquirer claims the Camden County College Mad Men course launched “March Mad Men Madness” and mentions a separate, five-week course about the show that will start on Mon., Mar. 21.

• Mad Men is mentioned on EW.com as a high quality television program with “amazingly fresh storytelling” in an article about Netflix’s negotiations to secure two seasons of an upcoming Kevin Spacey series.

• The Boston Globe interviews a major player at one of the nation’s top ad firms and asks about Mad Men‘s influence on the industry. The answer, not surprisingly: “It’s a terrific show. I watch it religiously. There is a lot of truth about what goes on with clients, there’s a lot of truth about the business process.”