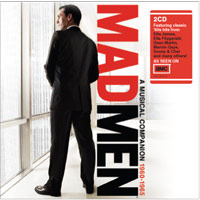 Mad Men fans looking for another way to experience the era now have plenty to get excited about: Mad Men: A Musical Companion (1960-1965) is a two-disc CD set scheduled for release Tue., Mar. 29, the same day the fourth season of Mad Men will be released on DVD and Blu-ray. Mad Men Season 4 sets, which are currently available for pre-order, contain all 13 episodes and are packed with hours of special features.

The Mad Men: A Musical Companion (1960-1965) (Hip-O/UMe) package features nearly three dozen pop favorites of the early ’60s. With both major hits and rediscovered tracks from a wide spectrum of artists (Chuck Berry, Dusty Springfield, Sonny & Cher, Tom Jones, and Ella Fitzgerald among others), Mad Men: A Musical Companion (1960-1965) exudes the romance and innocence of much of the music of the time. Click here to pre-order the set, and check back next Tuesday for a full track listing.