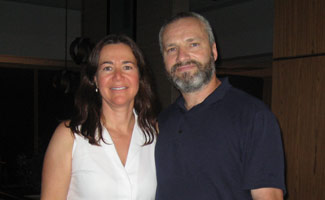 Q: What’s the collaborative process like in the writers room?

A: There’s a lot of banging our heads against the wall, especially as the season progresses and the camera is chasing us… Matthew Weiner gives us a direction and we do a lot of pitching to him. Parts of everyone’s personal experience end up in stories. We joke that we bleed our lives out on the table in the writers room, and there’s a lot of truth to that.

Q: How does your professional collaboration with each other work?

A: As a married writing team, we spend 24 hours a day together, so work spills over into our personal lives. Sometimes we feel like we’re constantly talking about stories. When it comes to actually getting something down on paper, we’ll split whatever script we’re assigned into A, B, and C stories and each take part. For us, it’s really about getting a draft written and assembled as quickly as possible. Then, we’ll polish that draft together until we feel it’s right.

Q: How did you meet and how did you start writing as a team?

A: We met when we were both assistants at Paramount… At the time, we were aspiring writers doing day jobs to pay the bills, and writing at night and on weekends. … It took ten years for us to actually be able to collaborate and get a paycheck as writers.

Q: How did you meet Matthew Weiner and how did your involvement with Mad Men come about?

A: Matthew Weiner was in a writing group with us when we were all struggling writers. We’d meet at Stir Crazy, a coffee shop on Melrose Avenue, and exchange pages — well, mostly we exchanged gossip about the industry. Eventually, we all ended up working on shows, but stayed in contact, reading each other’s work and giving encouragement. He wrote Mad Men as a spec pilot when he was on Becker and we were working on Star Trek: Enterprise on the Paramount lot. We loved it and told him if he ever got this going we would love to work on it. About six years later he gave us the good news.

Q: What have been your favorites moments or characters to write over the course of the series?

A: Maria likes a good Don/Betty scene from their marriage. Andre loves the scenes involving the emotionally damaged secondary characters like Freddy Rumsen and Duck Phillips. And the seduction of Peggy by Duck Phillips was a high point! However, the moments that have been our favorite are the flashbacks for Don Draper, where we see the circumstances that made him who he is.

Q: How have you determined which real-life events to reference in the series and how much importance to give them in the world of Mad Men?

A: If the historical event facilitates a theme Matthew Weiner and the writers are interested in exploring, then it becomes part of the season. It’s very important that we not just “do” an event because it happened that year. For instance, there was a great deal of discussion about how to use the death of Marilyn Monroe in [Season 2, Episode 9] “Six Month Leave.” Don Draper, like Marilyn Monroe, is very much a construct of the way people view him. Marilyn’s suicide ended up becoming thematically linked to Don’s feelings about the firing of Freddy Rumsen and, on a personal level, what’s in a name — the idea of identity and Don’s own crisis with that in the episode.

Q: Maria, you took a course on John Cheever in college. Can you explain how your knowledge of Cheever informs your work on Mad Men?

A: Not only did I take an entire course on John Cheever in college, but I grew up in a Cheeveresque neighborhood, complete with Betty and Don Drapers in every house on my street. It’s come in very handy when part of the job is to channel the melancholy discontent of suburbia. Cheever’s stories have this painful beauty to them and his characters have a special pathos that is endemically American. I feel that our show, as well, has succeeded in capturing this on many levels.

Q: Andre, did you coach Christina Hendricks when she sang “C’est Magnifique” in Season 3, Episode 3, “My Old Kentucky Home”?

A: No, I did not. I don’t mess with perfection.

Q: What do you think about the fascination with the 1960s that other networks, which have upcoming shows set in the era, now have?

A: On the one hand, it’s flattering that Mad Men has ushered in a wave of period shows from the ’60’s. On the other hand, where are all the props going to come from to sustain this?

Q: You are both executive producers as well as writers. How did that come about?

A: Television, when it works best, is a business where writers can enter at the bottom rung and through hard work, talent, and a thick skin, move up through the ranks, and perhaps even be fortunate enough to create their own show. We’ve been very blessed to have worked for and learned from a showrunner who believes in this system.

Click here to read an interview with Carrie Audino and Laura Schiff, the casting directors who choose the actors that bring the Jacquemettons’ scripts to life.