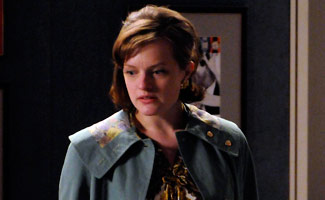 UK papers love Elisabeth Moss’ latest theatrical venture and Kiernan Shipka reveals herself to be a budding fashion maven, while John Slattery discusses how he’s keeping busy during the off-season. Read on for more…

• Elisabeth Moss garners positive reviews for her turn on London’s West End in Lillian Hellman’s The Children’s Hour from The Independent (“Moss makes a powerful impression”) and The Independent on Sunday (“Moss is electrifying and psychologically complex, with smothered jealousy”).

• John Slattery discusses a screenplay he’s written, telling The Huffington Post that he credits his confidence in the project to Matthew Weiner .

• According to the UK’s The Independent, Matt Weiner cited Humphrey Bogart as an inspiration while presenting a master class at Paris’ Forum des Images.