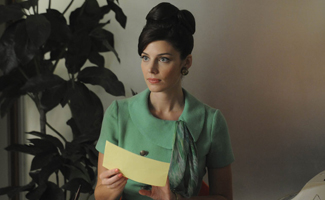 This week, actresses Jessica Paré and Kiernan Shipka land on best-of lists for their respective performances in Season 4, while Donatella Versace praises January Jones. Read on for details.

• Kiernan Shipka is lauded by the Kansas City Star [no link] as “this generation’s Jodie Foster” for her “electrifying” performance as Sally Draper.

• In a NYDailyNews.com article, Donatella Versace is quoted as saying January Jones “looks like the most glamorous actress of our time.”

• Gossipcenter.com posts photos of a Christina Hendricks posing at an event for Godiva chocolate.

• The St. Petersburg Times writes about the transformation of workplace etiquette from the Mad Men era to today, noting that from a contemporary perspective the show is like watching “the slow emergence of gender equality.”

• In an interview with MyNorth.com, Mad Men scribes Janet Leahy and Lisa Albert provide insight into the show’s “writer’s room.”

• The Guardian reports that Mad Men will join Boardwalk Empire and Treme as “one of the highlights of Sky Atlantic’s schedule.”

• The Los Angeles Times mentions Mad Men in a report about popular places to film in LA.