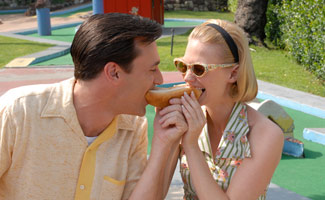 This week, the web is gearing up for the upcoming video release of Mad Men Season 4, while January Jones continues to speak to press about the box-office hit Unknown and Don Draper’s Kodak carousel makes its way to Canada. Read on for more!

• January Jones speaks to HitFix.com about her mega-hit Unknown and where she thinks Mad Men story lines could be headed in the future.

• Want to dive even deeper into Mad Men? The Courier Post has details on how you can take a course called “Sex, Drugs and a Little Rock’n’Roll: The Role of Sex on ‘Mad Men'” at Camden County College.

• Check out JustJared.com for a pic of Olivia Munn channeling her inner Joan for an upcoming episode of NBC’s Perfect Couples.

• As reported by the NY Times, John Slattery gets political, joining other famous New Yorkers including Whoopi Goldberg and Joan Rivers in an online video for the Human Rights Campaign.