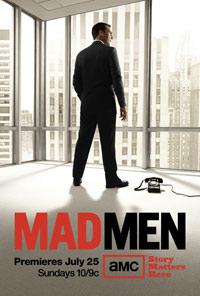 Every week, AMCtv.com honors the Talk forum and blog commenters by quoting them in the weekly “What You’re Saying” post, then awarding those who have commented as registered AMCtv.com users prizes like a Mad Men poster or 2011 wall calendar (limit one per person).

Moviegoers turned out in full force to see January Jones in Unknown‘s first week in theaters. (The film rocketed to the number one spot at the box office.) In addition, the Mad Men blog provided nine other opportunities to see other cast members in recent movies. Well, leave it to the fans to share even more. Read on to see where else you can catch the Mad Men stars or share an update of your own.

• “Let us not forget the estimable Michael Gladis (Mad Men’s Paul Kinsey), who will appear in the upcoming feature film, KNIGHTS OF BADASSDOM!” — Knights of Badassdom

• “Once you’ve seen Mad men you keep discovering the actors in tons of movies! I don’t mind because I love this show!” — bziki

• “Not to mention Zosia Mamet (Peggy’s friend, Joyce) who starred in Oscar-nominated “The kids are all right”!” — alyssaholden

Log onto the Talk forum to join a conversation or start a Mad Men topic of your own. As always, your comments throughout the blog are welcome.