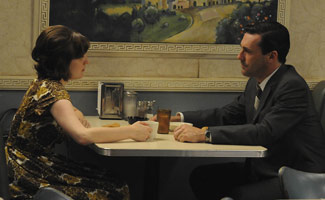 Mad Men continues its run of guild nominations today with a nod from the Directors Guild of America. Director Jennifer Getzinger picked up her second DGA nomination, this time for season 4, episode 7, “The Suitcase,” in the category of Outstanding Directorial Achievement in a Dramatic Series. She was previously nominated in the same category for season 3, episode 11, “The Gypsy and the Hobo,” in 2009. Her competition this year includes Jack Bender of Lost (ABC), Allen Coulter and Martin Scorsese of Boardwalk Empire (HBO), and Frank Darabont of The Walking Dead (AMC). Mad Men has won DGA Awards twice in the past: Alan Taylor won for “Smoke Gets in Your Eyes” in 2007, and Lesli Linka Glatter won for “Guy Walks Into an Advertising Agency” in 2009.

The winners will be announced at the DGA Awards on Sat., Jan. 29.