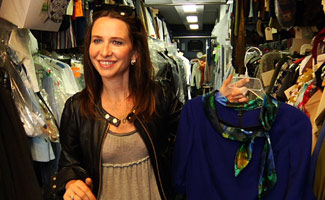 The Costume Designers Guild announced today their nominees for the thirteenth-annual CDG Awards, and Mad Men‘s Janie Bryant was honored with a third-consecutive nomination in the category of Outstanding Period-Fantasy Television Series.

Bryant, who won in 2009 and 2010 for her work on Mad Men, will this year face the designers of HBO’s Boardwalk Empire and Showtime’s Tudors for the award.

Winners will be announced Tue., Feb. 22, during a ceremony at the Beverly Hilton.

Click here to flip through an interactive multimedia gallery and interview with Bryant on Season 4 fashion.