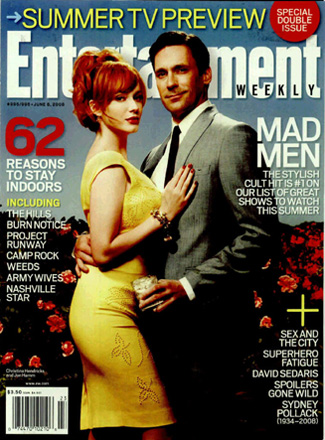 Jon Hamm and Christina Hendricks grace the cover of this week’s issue of Entertainment Weekly which takes an inside look at Mad Men.  Series creator Matthew Weiner and the show’s principal cast place some strategic hints about the upcoming season while carefully avoiding any plot spoilers.  The importance of protecting the integrity of the storyline has become a mantra on the set but Weiner does allow the series will not pick up exactly where it left off on Thanksgiving of 1960, “It’s enough of a period of time that people will wonder what happened in between.”

Also included with the article is a ‘Mad Men 101′ sidebar offering a crash course on each of the show’s principal characters (plus coy hints about where they might be headed in Season 2). Christina Hendricks alludes to an amusing development between Joan and Peggy; Michael Gladis admits that his character will be sporting a beard.