Low Winter Sun Production Designer Ruth Ammon is responsible for scouting the city of Detroit for the series. This week, she discusses the location used for the courthouse seen in Episode 8, “Revelations,” a location which was also used for the Detroit Police Department rooftop and entrance. 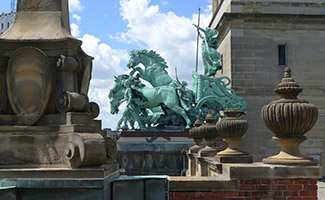 Our offices for the Pilot were situated on the fourth floor of the Antheneum office suites, and my office window had an arresting view of the Old Wayne County Courthouse with the Renaissance Center looming behind it. We initially scouted the building for a rooftop location of the Detroit Police Department, but we knew we would love to return for other scenes and locations. It had the large windows we wanted for the Low Winter Sun visual theme, with plenty of backlighting and silhouette. It was also the kind of building filmmakers love, not only because it had cinematic architecture but because we were able to shoot different locations in one building, saving time and money.

The building was constructed between 1897 and 1902 and was designed by Detroit architect John Scott. The exterior is a stately Beaux-Arts structure built of sandstone and pink granite. A rooftop tower boasts a large copper dome, and at the base of the tower are two fantastic bronze sculptures, each with four charging horses pulling a Roman chariot and figures representing Victory and Progress. They’re galloping towards Campus Martius Park, the heart of the city — which I like to think of as a symbol of hope for Detroit. 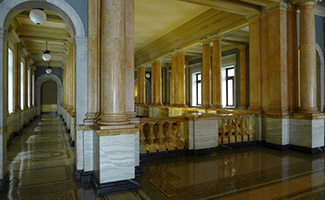 The interior is pristine and has more elaborate details. There are walls and marble columns in several different colors, mosaic floors, marble wainscoting and carved mahogany doors with exquisite hardware. What especially struck me was the scale: The bottom floors are lower and darker but the third- and fourth-floor hallways are very high and elegant. The natural light is amplified by the emptiness of the space and by the reflections of the marble wainscoting and polished mosaic floors. There’s also evidence of a renovation in the ’80s, with Sheetrock walls breaking large mahogany-paneled rooms into smaller multi-purpose rooms.

The courthouse and administrative offices moved out in the 1980s and the building is empty for now, but thankfully it’s been maintained with great discipline and pride. The third-floor space had been stripped of all courtroom elements like the judge’s desk, jury box, clerk’s desk, railings and benches. We designed and built these elements with the 1980s renovation in mind, thinking it would be interesting to have this layer as almost an effrontery to the original baroque interior. We aged our scenery to make it look as though it had been there for 30 years.

One of the challenges to shooting in the courthouse was creating consistent lighting in the courtroom. All the large radius windows looked out to an interior courtyard and made access to those windows difficult. We also had to be careful not to damage the mosaic floors with our equipment. Then there was the issue of no air conditioning in the building. We were told we had fairly good weather for summer in Detroit, but on the days we shot in the courthouse it was sweltering and made for very slippery marble stairs and hallways.

View additional photos of the courthouse and rooftop >>

Read the Detroit: On Location column from Episode 7, in which Ruth talks about the location used for Joe Geddes’ house >>