Low Winter Sun Production Designer Ruth Ammon is responsible for scouting the city of Detroit for the series. This week, she discusses the locations used for Damon’s blind pig in Episode 4, “Catacombs.” 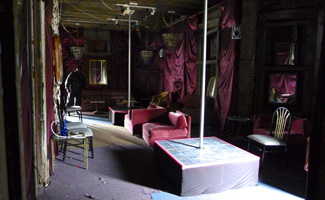 “Blind pig” is a familiar term to the people of Detroit — it’s slang for an illegal after-hours nightclub and brothel. Assembled fast and cheap, these places sell booze, drugs, and sex with a low overhead and big profit. [Executive Producer] Chris Mundy pictured the blind pig with Brush Park in mind. I first remember coming across Brush Park while looking through a photography book by Camilo Jose Vergara, American Ruins. I was taken by these once-thriving neighborhoods that had been abandoned and neglected. There are not many homes left in this area, so the skyline really adheres to that “toothless” principal I mentioned previously. There are more empty lots than there are homes, and it’s close to downtown Detroit, so Comerica Park and Ford Field can be seen clearly through the landscape. The homes that are left are mansions that were originally designed and crafted for the upper class of Detroit’s Gilded Age. A few have been carefully restored, but there are still huge gaps of empty lots.

We loved the complex detail of the Ransom Gillis House, a Venetian Gothic mansion on Alfred Street. Much of the interior had been scrapped and gutted, though in an effort to preserve and perhaps sell the historic house, the city had invested in some repair work. There were new access stairs, and new brick was patched in among the original brick on the exterior and interior walls. A steel pipe props up the turret on the outside. The only original details remaining inside were some Victorian window casings with peeling paint, a broken lathe, and plaster walls in the parlor. We incorporated this texture into our design. There were new open stud walls as if someone had started a renovation, so we used those studs to staple on some flashy, sexy fabric.

We came up with the interior design based on actual blind pigs we visited in Detroit. For the interior, we created a long, narrow lounge area for the clients to meet the girls. Along the walls, we positioned mismatched mirrors and Naugahyde sofas from thrift stores. All the seating faced the middle of the room, where we installed two very basic stripper poles. The bar was a 2×4 structure with turquoise faux-reptile vinyl. Drinks were served from discount-sized bottles in red Solo cups, and we added many other party-themed elements. 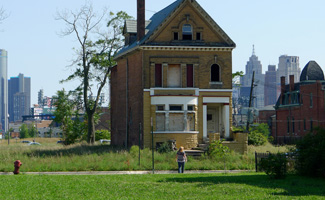 Unfortunately, the exterior of Alfred Street didn’t work cinematically — it was facing the wrong way for our lighting. However, one day while driving into Brush Park from another direction, we happened upon another house that sat perfectly alone on a lot. The city was in the background with nothing but overgrown weeds in between. The reflective glass of the Renaissance Center and the lights from the Tigers’ stadium made us stop the car and start envisioning the scene. This house was too derelict to use for the interior scenes, but through careful cuts and staging, we were able to use it for the exterior shots.

Read the Detroit: On Location column from Episode 3, in which Ruth talks about the locations used for Damon and Maya’s bar, The International >>