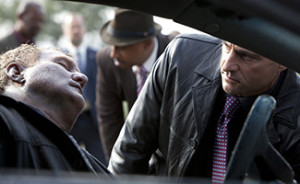 This week, TV Guide catches viewers up on Low Winter Sun, while Mark Strong discusses the show with the Los Angeles Times. Plus, Lennie James speaks with Access Hollywood. Read on for more:

• TV Guide showcases Low Winter Sun, catching viewers up on what’s happened so far and extracting a promise from Chris Mundy that all of the season’s mysteries will be solved by the finale.

• In a Q&A with the Los Angeles Times, Mark Strong talks about how Low Winter Sun has changed from the U.K. version to the U.S. version: “It’s as if you’ve taken and just blown it up and just made it larger and more intense.”

• Deadline Detroit interviews a Detroit Police Investigator and consultant to Low Winter Sun, Ira Todd, who says he wanted to show the drama’s creators that there’s “an underclass of people that are good people but just happen to be stuck in this city.”

• Previewing Low Winter Sun for The Queensland Times, Mark Strong says most of the show is “psychological fallout” from the first ten minutes of the series.

• Ahead of Low Winter Sun’s Australian debut, Lennie James tells The West Australian about the drama’s “symbiotic relationship” with the city of Detroit.