Low Winter Sun Production Designer Ruth Ammon is responsible for scouting the city of Detroit for the series. This week, she discusses the overall look of the show and the locations used for the exterior and interior of Detroit Police Headquarters seen in Episode 1, “Pilot.”

The Look of Low Winter Sun
We started shooting the pilot in late July of 2012, though at first it seemed wrong to be shooting in late summer because of the show’s title. After arriving in Detroit , I realized why [Executive Producer] Chris Mundy picked Detroit as the perfect landscape to achieve the look of the series. A winter sun is a sun that sits low on the horizon — it creates a feeling of quiet, haunting loneliness. As we drove around Detroit, we saw these landscapes of abandoned and fire-raised buildings and wide vacant lots that created strong, graphic cinematic frames. We looked for shots with “toothlessness,” like a mouth with many missing teeth. With the sun as our backlight, this became our look.

Detroit’s history is amazing. Most of America can’t fathom the degree of art and architecture that’s there. There are ghostly reminders of European craftsmanship and American manufacturing, and we enlisted local location managers to help us find and create our vision. Tom Moisides, the location manager for the series, has a background in urban planning, but more importantly, has a huge heart and commitment to Detroit. It was always exciting to scout for each episode with Tom and [Producer] Charles Carroll. We drove night and day looking for usual suspects as well as rogue finds. 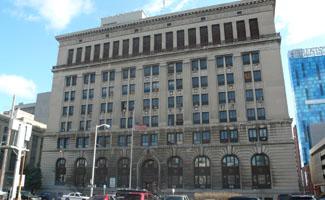 Detroit Police Department – Exterior
Location: 1300 Beaubien St.
The original Detroit P.D. headquarters was located at 1300 Beaubien, but we actually chose the building for other reasons. The building was designed by architect Albert Kahn in 1923 and captures the historic grandeur of Detroit. It’s located near Greektown, which is part of the soul of our story, and it embodies the Low Winter Sun aesthetic: It has a beautiful, but blackened, limestone exterior. There are large radius windows that have been rusted and cracked by weather and neglect, and grass grows through large cracks in the granite steps of the elegant front entrance. Another consideration was the position of the building: It was located in a wide-open space amid parking lots for municipal workers and sports fans. Backed by the downtown architecture, it made for a very cinematic moment in the Pilot when Joe Geddes takes a smoke break outside the station. Director Ernest Dickerson and Patrick Murguia, our director of photography, panned 180 degrees from the lit-up city background to the shadow of the Detroit P.D. The people-mover timed perfectly when it happened to enter the shot. It was the last scene shot on the Pilot, and we were ecstatic. 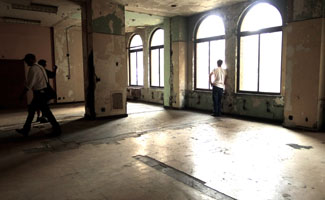 Detroit Police Department – Interior
Location: The David Stott Building, on Griswold and State Streets
Chris Mundy and Charles Carroll had seen this building on an early pre-scout run several months before we started working on the show. Six months later, Charles remembered the building after we’d exhausted several other options. When we landed on the third floor, the sun was setting through the large radius windows, and the walls were stripped bare with peeling paint and broken plaster. I took a picture of Chris standing at the window (at right) with the rest of the team staggered around the room. He was backlit by the sun. It’s a quintessential Low Winter Sun shot.

The David Stott Building is an elegant, 1928 early Art Deco tower with beautiful brass and marble details. I’m told the elevator doors are the most elegant in the city. It was this sort of elevated architecture and craftsmanship we wanted for the bones of our set. We partly modeled the interior of the station based on reference photos that I took from a visit to the abandoned fifth floor of 1300 Beaubien. Our construction department demolished all the sheet rock walls, and we then built glass and wood partition walls based on design details from other floors of the building. Cinematically, we wanted to create some separation between the characters, but we also wanted everyone to be able to see each other in kind of a fish bowl environment.