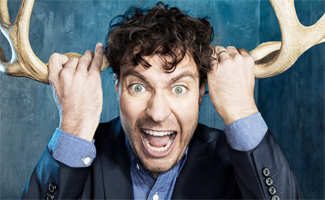 Taxidermy expert Rachel Poliquin talks with Zach Selwyn, host of AMC’s Immortalized, about the strangest piece of taxidermy he’s ever seen and what his own rogue taxidermy piece would look like.

Q: How are you enjoying the show so far?

A: It is amazing. And I think the episodes are getting stronger as the series progresses. I’m really enjoying watching the competition between the rogue and traditional taxidermy. I think it’s getting more interesting as the challenges get harder. It is really bringing out what the competition is all about.

Q: How did you end up with the hosting job?

A: I got lucky. I grew up with a bit of taxidermy, so I thought I knew a little about it. It was a great experience being part of the show.

Q: How was it different than other projects you’ve been involved with?

A: It was very interesting because I’d never dealt with the subject matter before. On other shows I’ve done, they would let me be the crazy comedic guy. On this show, I was there to deliver the information. It was very different experience, but a very fun, unique and cool experience.

Q: What’s the strangest piece of taxidermy you’ve ever encountered, on the show or otherwise?

A: The spider-horse-demon [by challenger Cat Grey] made out of a horse head, leather and eye balls and balanced by her old couch. That was the first thing I remember filming on the show, and I remember thinking, “Oh my god, there are some very artistically creative and absolutely bizarre people in this business.” It made me really excited, because I thought Immortalized was just going to be 12-point bucks and traditional waterfowl. When I saw that piece, I thought, “Now we’ve got a show!”

Q: Has the show inspired you to want to purchase any taxidermy?

A: The piece I loved the most on the show was Page Nethercutt‘s bird and cat piece. I thought that was beautiful. I liked that he used cacti on the base. That piece was something I would buy and put in my house. But it would have to be something like that since I come from Arizona — the desert with desert animals.

VIDEO: Final Reveal from Episode 102, “End of the World”

Q: What was the craziest thing that happened on the set?

A: Other than Takeshi saying “Shazam!” every time he ate a carrot dipped in hummus? We worked pretty hard on the set. The hardest thing was to keep the contestants away from the judges so they didn’t find out what the theme was too early. It was a pretty mellow, well-run set.

Q: What was the most important thing you learned from the show?

A: I learned that there are rogue taxidermists. When I was in the audition, they explained that there are two types of taxidermy in this world, and when I was introduced to the rogue side, I was immediately opened up to an entirely different world. It’s like when you learn that all rap music isn’t gangsta rap. There is this world of taxidermy that exists and that people take it extremely seriously.  Beth Beverly finds a raccoon that’s been hit by a car and she immediately makes a hat out of it. If I see that stuff, I run the other way — I’m like, “Oh God, someone get a garbage bag and clean that up.” They’re like, “Oh God, that’s art, that’s beautiful.”

Q: If you were to create a piece of rogue taxidermy, what animals would you combine?

A: I’ve always wanted to make a giradger — you know, half giraffe, half badger. I would dress him up like he was in KISS, put on some makeup, and give him a guitar.

Q: So where would the half-badger go?

A: I haven’t figured that part out yet. I’m still looking for a giraffe to use in my piece. You can’t really find them as roadkill.

Q: Do you prefer rogue taxidermy over traditional?

A: I really appreciate both, but I think it’s harder to do traditional. So I appreciate anyone who can really master the traditional stuff. I think it is a lot harder to get all the anatomical parts perfectly recreated than to create something out of your imagination. It’s easy for me to say, “I’m going to create that giradger” because I can make it look like anything I want. But if you’re recreating an eagle, then you really have to look at what an eagle looks like.

Q: Do you think taxidermy can go too far? For example, I’ve seen animal bodies mixed with Star Wars figurines.

A: I love that stuff. Before I did the show, I would have thought, “Why would anyone ever find this interesting?” But now that I’ve seen the creative process and what these people do, I think the sky’s the limit. Initially Beth’s unicorn-cat-mermaid piece was a little strange to me, just because I was amazed that anyone could combine three different animals into one. But then I thought, “Well, hey, we’re reinventing things.” Takeshi makes dragons and five-headed hydras from the depths of hell. It is just so cool that people are doing this stuff. So I don’t know what too far would be. Maybe if there was a human being involved, that would be too far.

Q: Doesn’t Takeshi incorporate some of his own skin into his pieces?

A: He did. But to me that’s like if I clipped a fingernail, then used it as a horn on something. It’s not like I saw parts of his forearm making up one of his pieces. I don’t think he went too far with it. I’d get concerned if someone mounted their dead grandmother.

Q: If you wrote a song about taxidermy, how would it go?

A: It would probably be called something like “Go Stuff Yourself.”