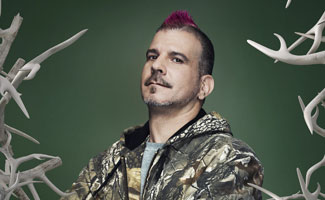 Taxidermy expert and author Rachel Poliquin talks with Dave Houser from AMC’s Immortalized about secrets in the taxidermy world and how to make a realistic tongue.

Q: With your hot pink mohawk, I thought for sure you would be on the stranger side of taxidermy. But you do very traditional mounts…

A: I am 100% traditional. I never got into messing around with rogue stuff.

Q: That was going to be my first question: “Have you ever made a rogue creature.” So why not?

Q: Is there any competition between rogue and traditional taxidermists?

A: There are millions and millions and millions of hunters in the country, and they are probably going to find the rogue stuff sort of offensive… They like to see animals as natural as the day they killed it. But on the other hand, you have the art side of the rogue taxidermists who are in bigger-city Los Angeles, New York, Dallas… They may find regular taxidermy offensive because they will be seeing the animal pretty much as it was when it was alive. It’s not really a fine line — it’s two different types of art.

Q: Why do you think taxidermy is becoming so fashionable in urban areas and with non-hunters?

A:  Back in the 1800s, people had furs. I don’t think it is more mainstream in the fashion world today — I think it has always been there; it is just getting the press now. People have always worn fox hats and raccoon hats… They’ve been doing it for centuries.

VIDEO: Who is Dave Houser?

Q: You say you taught yourself taxidermy from mail-order instruction manuals…

A: I did. I think the company J.W. Elwood goes back to the early ’40s. It was a mail order course, and I think I paid $12 for all the courses. You took the instructions in the book, you took pictures and answered a questionnaire, and you sent all that back in. If your work was acceptable for whoever was responsible for looking at it, and you passed the test, you actually got a diploma that said, “J.W. Elwood, Northwoods School of Taxidermy,” and it had your name on it.

Q: Do you still have any of your early work?

A: I don’t have any of my early taxidermy work at all. I can’t even look at it.

Q: Taxidermy is such a hands-on skill. Can you really learn it from books?

A: Well, back in the ’70s and ’80s and early parts of the ’90s, taxidermy was a huge, huge secret. You couldn’t go to a taxidermy shop and ask for advice — they wouldn’t give it to you… And then in the ’90s and early 2000s, taxidermy opened up. I mean, it just exploded, and there are hundreds of DVDs now. You can go to any state taxidermy convention and talk to anybody and they will share all their secrets with you. It has really opened up from being very secretive to very competitive.

Q: Why do you think that is?

A: I think that the state shows were offering seminars to the members who came to show a competition piece. And through those seminars, they were learning from the best of the best. And that’s pretty much what opened the doors up, was having teachers who were paid to come in and reveal their secrets to other taxidermists. And now there are very, very few secrets in the taxidermy world… Taxidermy work is ten-fold better than it was in the ’80s, and that has to do with people learning and having other taxidermists talk to them and show them how to achieve something.

Q: How do you make an open mouth look realistic on a taxidermied animal?

A: You would take a cast — like when the dentist casts your teeth — you take a cast of the whole inner mouth and then use a resin or plastic to recreate it. Then you paint it to match how it was when the animal was alive… A lot of guys even go to the extent that they will cast the tongue, and then when the mold is hard they will take the outer skin off the tongue and then put that outer skin on the cast tongue. Because you’re not going to get all those fine details if you don’t put that little layer of skin back over the cast tongue.

Q: How is Immortalized different from a regular taxidermy competition?

A: The Immortalized competition is great because you have three different categories that a piece is getting judged on, but in a state competition you’re getting judged on the actual animal. So anything that animal had in nature, it better have in state competition. You’ve got to have the nictitating membrane in the eye. You’ve got to have the nasal post in the nose. You’ve got to have ear bud detail in the ear. If any of that is missing, you’ve failed. And you don’t get to explain to the judge why you set the eyes the way you did, or why the animal is in the pose that it is in. Now, in the Immortalized competition, you can explain all of that and try to persuade the judges why you are so much better than the other competitor. In a regular taxidermy competition, you don’t have that opportunity.

Click here to view photos of Immortalizer Dave Houser in his studio.