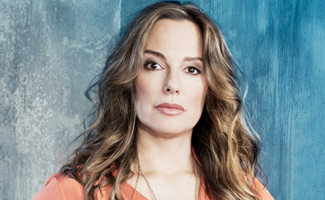 Taxidermy expert and author Rachel Poliquin talks with Catherine Coan from AMC’s Immortalized about freeze-dried canaries and the intersection of rogue and traditional taxidermy.

Q: You grew up in Montana in a hunting family…

A: I did. My dad was an anesthesiologist, but he fancied himself a woodsman. He is actually a world-class fly fisherman and also started hunting back in the ’70s when we moved to Montana. We had trophies all over our house, from fish to mountain lions.

A: As a little kid I found it fascinating, but as I turned into a teenager I thought it was all pretty gross.

Q: So why did you start incorporating taxidermy in your artwork?

A: About four years ago I started using taxidermy in my Canary Suicide series… I’ve always been fascinated by closed spaces, like medieval reliquaries…and I wanted to do some three dimensional storytelling. My interest in reliquaries led me towards cages, and I was thinking about telling stories about birds in cages, obviously dead. I wanted to use something that looked like a dead canary, but it turns out nothing looks like a dead canary except a dead canary… I finally found somebody who actually freeze-dries canaries. In fact, one of her biggest clients was a hotel in Las Vegas who has them in trees in the lobby… I started buying from her and then got interested in doing them myself. As I worked with them for a couple of years, I started thinking about doing bigger three-dimensional things with other animals and doing dioramas inside their bodies. At that point I thought I really should learn how to do this, rather than just buying it. Last year I went to a six week taxidermy school in Montana and actually learned how to do the taxidermy.

Q: Sounds intense. Do you think you are ready for a taxidermy competition?

A: [Laughs] It’s a good question. It probably depends on what kind of taxidermy competition you are talking about. When you go to a national taxidermy competition you are being judged on very different criteria than our show is judging on… I guess I would say I could probably compete in the novice level, or possibly intermediate, and I’d be happy to do OK in that. My role on the show so far has been to tie together the artistic perspective and the taxidermy. Really Paul Rhymer is the expert taxidermist on the show, and I’m still at the point where I am learning.

A: It has been nothing but fun. Some of the people I’m judging, especially the more traditional taxidermists, are much better at taxidermy than I am. There are many times on the show when I’ve said things like “That’s nothing I could do, but understanding taxidermy, here is how you could do it better.” It is uncomfortable sometimes judging someone who has far more experience and knowledge of taxidermy than I do… But from an artistic perspective, I feel very comfortable judging them because we’re not doing a traditional, old school taxidermy contest. We’re talking about things like scenes, composition, and imagination.

Q: Do you ever wish you were an Immortalizer instead?

A: [Laughs] No, I don’t. I think I’ve probably got it easier than they do. Being an Immortalizer would be fun, but what’s really interesting to me as an artist is seeing what everyone is doing.

Q: There have been other attempts at taxidermy television in the past. What makes Immortalized different?

A: We’re more of a game show format… The competitive aspect of it, and the idea that they are given a theme, allows viewers to see what can be done with both traditional taxidermy and rogue taxidermy. If you are just watching someone working in their shop, you get to see what they do day to day, which is fascinating in its own way, but they are not taking it to that next weird, artistic level.

Q: Has seeing the work on Immortalized changed your perspective on taxidermy?

A: I hope that traditional and rogue taxidermy will get closer and closer together until you are seeing really fine taxidermy, but much more outrageous ideas using those taxidermy skills. I think it has really made me slow down and really think how to make pieces that are very strange and interesting to look at, but are using the finer skills of taxidermy. And that takes time and practice and a lot of failure.

Q: Are people surprised to find out about your passion for taxidermy?

A: I have a 17-year-old step-daughter, and I think she tries to prepare her friends when they come over. There will be a couple of dollhouses with dead birds in them on the kitchen table that I’ve just brought in from my studio. Or they’ll sit down to watch a movie, and there is a spring hare looking at them from the chest across the room. But I think most people are more fascinated than grossed out by taxidermy. What ends up happening is that they want to walk around and look at them and ask questions. And it is fun to explain the process. Most people think there are still bones and guts in there. They’ll ask, “How do you preserve the eyes?” And I get to explain that they are made of glass.