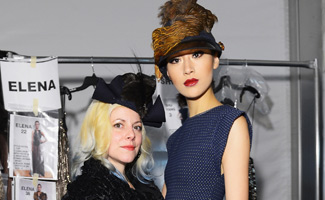 At Mercedes-Benz Fashion Week Friday, a model sauntered down the runway in a bold taxidermy hat by Beth Beverly, rogue taxidermist and one of the stars of AMC’s new original series Immortalized. Beverly’s “Bobby” hat, featured in fashion designer Cesar Galindo’s Fall 2013 collection, is made of navy blue felt and features a taxidermied rooster on top. “I couldn’t have asked for a better model or a better dress,” said Beverly, who sat in the front row sporting one of her creations as well. “I call it ‘Bobby’ because it’s sort of reminiscent of a British police hat.”

Cesar Galindo describes his collaboration with Immortalized as a natural fit: “First of all, Beth’s so cool,” he says. “She’s really laid-back like I am, and really passionate about her work.” The designer is originally from Texas, where he says “we have [taxidermy] hanging on our walls.” Galindo was excited to incorporate Beverly’s piece into his line this year, a collection inspired by the idea “suspended life.”

“You know when you’re doing the right thing and it just all comes together? A big part of that was looking at Beth’s work. I was like, ‘Oh my God, this would be perfect for the runway’… My illustration was a visor with a bird on it, so it was weird how it all came together.” One of the greatest things about Immortalized, adds Galindo, is that “people are going to see the true craft of [taxidermy].” 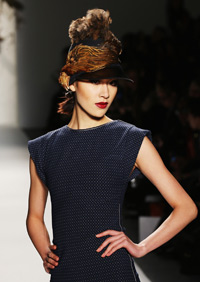 Fellow Immortalizers Page Nethercutt, Dave Houser, and Takeshi Yamada, along with Immortalized judge Catherine Coan, sat front row with Beverly to support their castmate. Houser, the pink-mohawked traditional taxidermist, said it was “really cool” to see their artform incorporated into a runway show. “Taxidermy can be used as any kind of art,” Houser explained. “It’s just up to the imagination of the person that wants to use it and how they want to incorporate it.”

Backstage, Galindo and Beverly posed for photos with the Immortalizers, as well as cast members of AMC’s Freakshow, including the tattooed and pierced Marcus “The Creature,” the world’s second-tallest man George Bell, and L.A.’s tiniest woman Amazing Ali. As for Galindo, he says he’s looking forward to taking a break after Fashion Week to watch Immortalized, which premieres along with Freakshow on Thursday, Feb., 14.