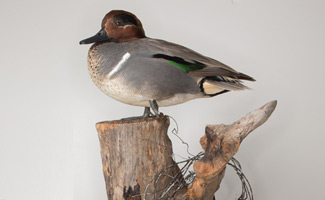 In the Immortalized Handbook, AMCtv.com takes a deeper look at taxidermy’s origins as a scientific art form. Immortalized premieres on Thu., Feb. 14 at 10/9c.

Derived from the Latin taxis (arrangement) and derma (skin), taxidermy is the process of skinning, cleaning, stuffing and mounting dead animals so they appear to be alive.

According to Rachel Poliquin, creator of the website Ravishing Beasts and author of The Breathless Zoo, early uses of taxidermy are tied to Europe’s Age of Discovery in the 15th Century and the opening of lucrative trade routes to the East Indies (America), the West Indies, Africa, Southeast Asia. Spice merchants sometimes brought home exotic animals and birds from their travels. Spices were used to preserve the skins, and the specimens could then be stuffed and sold. The earliest known examples of these taxidermies date back to approximately 1600, when a rhinoceros was mounted and put on display in a Florence Museum.

But it was the burgeoning interest in the natural world that truly fueled the development of taxidermy, beginning in the late 18th century. One had to study animals, inside and out. Taxidermy became an indispensable tool to the natural scientist, who needed to recreate his animal subject as accurately as possible. Museums of natural history were established in to educate and entertain the general public, and taxidermied animals were a focal point. Science and taxidermy have gone hand-in-hand ever since. Natural history museums have been at the forefront of perfecting taxidermy techniques, not only in terms of creating viscerally lifelike animals but also in depicting them as they behave in their environments.