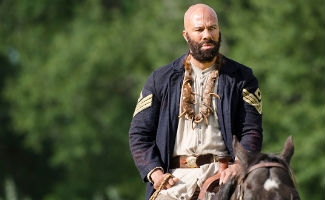 This week, CarterMatt.com lauds Common’s performance in last week’s episode and looks ahead to this week’s Elam-centered episode. Plus, get the scoop on what critics thought of “Bear Man.” Read on for more:

• Ahead of “Bear Man,” CarterMatt.com remarks, “Common kills it in the sneak-peek video below, as do the entire makeup and effects team for getting Elam so bloodied-up here.”

• CarterMatt.com previews the next episode, “Elam Ferguson,” observing that “we only imagine that the story will build in intensity here on out.”

• CarterMatt.com highlights AMC’s video of a post-“Bear Man” Common explaining how he approached the episode.