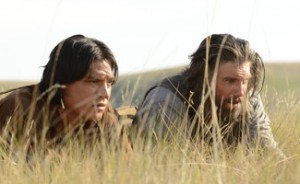 This week, Eddie Spears helps to induct Wes Studi into the Hall of Great Western Performers. Plus, the director of Alan Partridge thinks Colm Meaney is “brilliant” in the movie. Read on for more:

• Wes Studi, talking to Cowboys & Indians about his induction into the Hall of Great Western Performers at the National Cowboy & Western Heritage Museum, says one of the award presenters was Eddie Spears, who played his son on Hell on Wheels.

• Talking to Filmoria, the director of Alan Partridge applauds Colm Meaney, saying that “one of the brilliant things he did, he made his character seem very real and, in some ways, grounded the entire movie.”

• The Santa Fe (N.M.) Reporter‘s review of Alan Partridge calls Colm Meaney “delightful” in the movie, while The Seattle Times describes him as “great.”