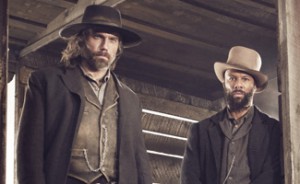 This week, Hell on Wheels is commended by The Hollywood Reporter for its Saturday night ratings, while CarterMatt checks in on Season 4. Plus, one of the show’s writers and producers wins kudos from Den of Geek. Read on for more:

• The Hollywood Reporter calls Hell on Wheels a “staple and solid performer on Saturdays.”

• CarterMatt offers an update on Hell on Wheels, noting the drama “flourished and maintained an audience of live viewers” during its Saturday time slot.

• The Tennessee Titans website reports that Anson Mount will take part in a Q&A, along with the team’s coach Ken Whisenhunt, to raise money for Duchenne muscular dystrophy.

• Talking to The Huffington Post, The Charlie Daniels Band’s eponymous frontman credits Hell on Wheels for the group’s Bob Dylan album. Daniels also speaks with The Journal News about the drama’s influence.