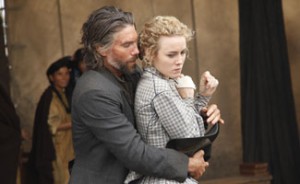 This week, Hell on Wheels walks away with the Alberta Film & TV Award for best drama. Plus, Dominique McElligott nabs the Astronaut Wives Club lead. Read on for more:

• Hell on Wheels won the Alberta Film and Television Award for best dramatic series, as well as four other awards, the Calgary Herald reports.

• According to The Hollywood Reporter, Dominique McElligott has been cast as the lead of ABC’s Astronaut Wives Club.

• According to the Daily Pilot, Common visits the University of California, Irvine to share the message, “We have to be willing to be around people that are different than us and be accepting of that, and by the same token, be proud to be who we are.”