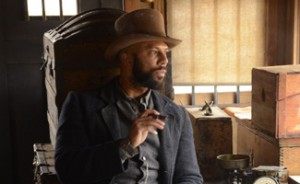 This week, Common drops a single from his upcoming album, while Season 2 of Hell on Wheels reaches Australian TV screens. Plus, Tom Noonan has written a play that will have its world premiere in New York in February. Read on for more:

• MTV reports that Common dropped “War,” a song from his new album that laments the cycle of violence in his hometown of Chicago.

• The Australian previews the broadcast of Hell on Wheels Season 2 in Australia, noting it’s been “a while since a good western has come our way.”

• The Shape of Something Squashed, a comedy written by Tom Noonan, will premiere next month in Manhattan, according to Broadway World.

• The Las Vegas Sun reports that Common hosted the New Year’s Eve celebration at The Bank nightclub in the Bellagio.