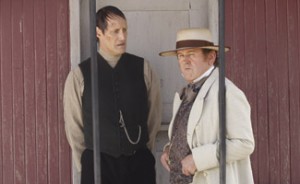 This week, it’s reported that Beauty and the Beast will feature an appearance by Christopher Heyerdahl. Plus, Colm Meaney is considered to be a John Fox lookalike by Bleacher Report. Read on for more:

• TVLine reports that Christopher Heyerdahl will guest star on the CW’s Beauty and the Beast later this season.

• Bleacher Report’s Super Bowl XLVIII doppelgangers include Colm Meaney and John Fox, head coach of the Denver Broncos — saying that if Hell on Wheels “ever wanted to cast a law-abiding brother for Thomas Durant, I know a guy in Denver.”

• Jennifer Ferrin speaks with La Jolla (Calif.) Light about starring in the West Coast premiere of Bethany, noting, “I’ve been looking for a play with a small ensemble, and I’m very excited to work with a female director.”