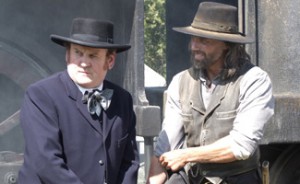 This week, The Ottawa Citizen applauds Hell on Wheels as “still firing on all cylinders,” while Indiewire highlights the fact that Neil LaBute made his debut as a TV director with a Hell on Wheels episode. Plus, Anson Mount speaks about the show with The Daily Telegraph. Read on for more:

• The Ottawa Citizen calls Hell on Wheels “a cracking good yarn, still firing along on all cylinders, three years in.”

• Indiewire showcases a clip from Episode 5, “Searchers,” which was directed by Neil LaBute.

• Anson Mount tells Australia’s The Daily Telegraph about the importance of the transcontinental railroad as the backdrop for Hell on Wheels.

• TVGrapevine learns five things about Kasha Kropinski, including the fact that she was born in South Africa.

• New Orleans Magazine interviews Lolis Eric Elie, the show’s script supervisor and a writer, about the challenge of working on historical fiction like Hell on Wheels.

• For recaps and reviews of Season 3, Episode 5, “Searchers,” check out Basket of Kisses, Cowboys & Indians, Starpulse, TV.com and TV Fanatic.