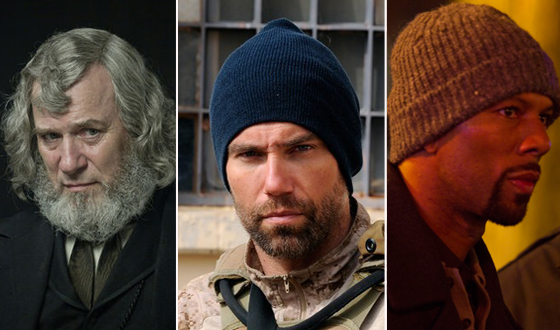 Missing your favorite Hell on Wheels stars during the off-season? Save your tears! With just under two months before the Season 3 premiere, you can bring Anson Mount into your home on DVD or watch Common in your local multiplex. Check out these recent movies if you’ve just got to see a Hell on Wheels actor before the series returns on Sat., Aug. 10.

Anson Mount, Seal Team Six
On DVD
The search for Osama bin Laden serves as the backdrop in this military pic in which Hell on Wheels‘ leading man plays a U.S. Navy SEAL on a mission of justice.

Common, Now You See Me
In Theaters
Common leaves the world of cowboys and Indians to play cops and robbers: Here, alongside Morgan Freeman, he’s an FBI agent out to stop magicians from pulling off bank heists.

Common, Pawn
On DVD
Joining Ray Liotta and Forest Whitaker, Common tackles the role of hostage negotiator in this movie about a robbery gone awry.

Christopher Heyerdahl, The Twilight Saga: Breaking Dawn – Part 2
On DVD
Before he was playing The Swede on AMC, Heyerdahl had already earned fans as Marcus, the introverted vampire in Twilight series.

Robin McLeavey, Abraham Lincoln: Vampire Hunter
On DVD
You think Eva has troubles? In this big screen adaptation of the popular comic book, McLeavy plays Abraham Lincoln’s mother, Nancy who gets killed by a vampire.

Phil Burke, This is 40
On DVD
Mickey came west to find fortune in Hell on Wheels. In this follow-up to Knocked Up, he’s already made it big as a professional hockey player.