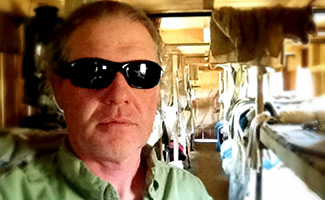 Alan McCullagh, Set Decorator for AMC’s Hell on Wheels, discusses the set piece that inspired an entire episode and what Hell on Wheels has in common with Inception.

Q: The set decorator comes in after the sets are built. Describe exactly
what you’re responsible for.

A: An example would be the saloon. Construction builds the floor and the walls and puts the roof on. Then the painters age down the floor, the wood, the canvas. And we essentially do everything else — the lighting, the furnishing, the artwork, the cast irons stoves, the glasswear, the bottles, tobacco, the piano, all of the seating. Anything that isn’t a fixed object falls under our responsibility.

Q: What’s your process for getting materials and set pieces that are
historically accurate?

A: We’re really fortunate that, in Alberta, the lion’s share of the work that we do here is period Westerns, so there are several prop houses here that facilitate these periods. My buyer will typically go out to every antique store that we can get to reasonably within our jurisdiction… This year we traveled to other cities to search their antique stores, just to generally build a catalogue of what’s available, and then as storylines present themselves to us, we can then go back and…we’ll say, “Oh, we saw a great lamp in Edmonton. Let’s call that antique store and see if they still have that lamp.”

A: We have actually rented out of Los Angeles before… In episode one of [Season 3], we had to find a crucifix… What we ended up with was an 18th century cast-iron Jesus that we had to ship up and use for the scene… I was able to call the gang down there [in L.A.] and I was able to facilitate getting us the piece that we needed that was accurate in regards to its finish and the patina on it — and it was beautiful, and it was period correct.

Q: The show films out on a large ranch, which must be difficult to reach. How do you get materials to set safely?

A: Unfortunately, not everything arrives in one piece. The logistics of the location itself –there’s a pretty treacherous hill, and when we started prep on this new season we were still on the tail end of winter, so there’s lots of frost in the roads and lots of snow and lots of runoff… So it’s literally get it on trucks, get it down the hill… It’s epic in its undertaking.

Q: Has there been a time where a set piece influenced the storyline on Hell on Wheels?

A: Last year, in order to park all the work trucks and stuff like that, we needed to build…an abattoir — essentially a butcher’s façade that was to help hide the work trucks… Well, when the writers came up and saw that we had built this, they were like, “Hey, wouldn’t it be interesting if we had an episode that had a butcher in it.”

A: In the butcher episode, “Slaughterhouse,” a large majority of the meat that was in that set was real… Most of the stuff that we’re shooting are made from the materials that they should be made from. Like, all of our tents are all canvas; all of our wood is rough-cut wood like they would have had back then; the candles are all actual beeswax candles, as opposed to using modern paraffin. We try to keep things as legitimate as possible because when you’re faking stuff you have to continually try to make it feel real.

Q: How has your approach to set decorating changed for the new season, if at all?

A: Last year, it felt like this was going to be a town that Hell on Wheels was going to leave behind… Whereas this year, our Hell on Wheels, we want it to have that feeling of being nomadic, so when the train track is 30 miles from town, we can make it feel like everything has been packed up and traveled past where the men are working, which is historically what would happen. Hell on Wheels, the town site itself, all the vendors and merchants and bars and brothels and all that kind of stuff — when the men were no longer coming back to the town, Hell on Wheels went to the men.

Q: What’s been your favorite Hell on Wheels set to decorate?

A: We did a couple of sets [for Season 3] that have been a lot of fun because they’re so removed from what we’re typically doing. We’re typically in dust and dirt and mud and canvas, and this is more brick and filth and gas lamps, and then in our higher-end sets it was high-end upholstered furnishings, nice lighting.

Q: You worked on the scifi flick Inception as an assistant set director. Did you learn anything from that film that you’ve incorporated in your Hell on Wheels work?

A: There are similarities for sure. The difficult thing for a production like Inception is that…they take their storyline secrecy seriously. Very very few people read the script. How that’s helped on this show is, because we only have eight days of prep, and we often don’t receive scripts and schedules until the eleventh hour before we’re going into something, the patience that you learn for waiting for information and essentially having all of the scenarios you think may happen sort of pre-planned before you have to pull the trigger on anything — that’s one of the things that we learned over there.

Q: You have to be a master of thinking on your feet…

A: I like to think what we do is much like free-form jazz. Sometimes the pace is slow and it’s ta-doo, ta-doo, TA. And sometimes it’s a full blown drum and piano solo, and they’re both playing in a different key and in a different time signature and so it’s a matter of being able to maintain flexibility in the face of chaos.