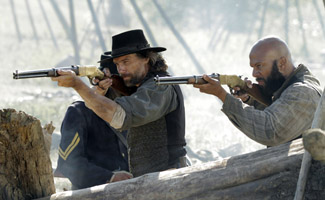 This week, TV Shows on DVD reports that the Hell on Wheels Season 2 DVD and Blu-ray will go on sale in July, while Common is honored with a BET Award nod. Plus, New York‘s feature on how to write a TV drama uses Hell on Wheels as an example. Read on for more Hell on Wheels news:

• TV Shows on DVD reports that the Hell on Wheels Season 2 DVD/Blu-ray will be available on July 16.

• The Pittsburgh Post-Gazette notes his role in Hell on Wheels in its report on Common’s nomination for a best actor BET Award.

• New York‘s primer on how to write a TV drama cites Hell on Wheels‘ Reconstruction-era West setting as an example for Rule 3: “Set your show at the end of an era.”

• C21 Media reports that Red Bull Media House has bought the exclusive free TV rights to Hell on Wheels, with plans to air all three seasons in Germany, Austria and Switzerland.

• Ireland’s Independent reports that Hell on Wheels will be shown this summer on RTE.