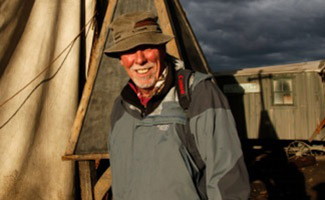 Q: You’ve worked on several Westerns, including AMC’s Broken Trail. Is that how you got this job?

A: With my background in Westerns — I’ve done about 20 different Westerns — Hell on Wheels seemed like a pretty good fit for me. For Westerns, there is a very specific shooting style needed. Half the time, they’re on horseback and shooting up at an actor isn’t the most flattering angle. You spend a lot of time on a ladder or platforms so you can shoot the actors on horses straight-on.

Q: How many cameras do you use in a typical shoot? What do you use each one for?

A: In my kit, I carry four bodies. Generally, I have at least three cameras around my neck. I have one that is almost to be confused with a point-and-shoot, but it’s very light and totally quiet. One of my main cameras will be in a “blimp,” which is a soundproof housing. I’ll have another body with a 24-120 mm zoom on it. The fourth body will have the equivalent of 100-300 mm zoom on it. With a show like Hell on Wheels, it’s such a broad campus. The set is so big and the action can take place way in the background up to a close-up all in one continuous take. It’s nice to have a wide variety of glass on me at all times.

Q: How do you deal with smoke from the guns being fired?

A: Gunfire is always tricky because it’s so fast. A lot of the time, all you can do is anticipate and try to do a quick burst of three or four frames and see if you get the actual fire coming out of the barrel. There’s no way to make sure you’re going to get it. It’s just a matter of keeping at it, and sometimes you get lucky and sometimes you don’t! [laughs]

A: I look at the angles that the Director of Photography [Marvin Rush] is choosing. He’s got a vision of how he wants to do it, and I spend a lot of time just watching and getting a feel for it. Let’s say there’s an explosion or a bullet hit, I talk to the special effects guys: How much camera is going to be here? Where’s the explosion going to go? I figure out where the wind is so the smoke doesn’t drift back into me and ruin my shot. It’s all about sitting back and watching. I spend a lot of time just looking at how the scene is going to unfold.

VIDEO: Inside the Season 2 Finale

A: I tend to shoot wide-open a lot of the time, which draws the attention. That’s a fairly common way of bringing the eye to the actor. On extreme close-ups, I want to make sure the eyes are sharp. If the nose or the side of the face goes out of focus, I want to make sure the eyes are always sharp. I’m a big guy — I’m 6’1″ — so I’ve got some height there and I like to be on the same plane as my actors.

Q: How do you avoid distracting the actors?

A: That’s one of the biggest challenges that still photographers have. There’s a camera, a camera operator, a focus puller, a boom operator and a dolly grip all directly in [the actor’s] eyeline. The first time I meet them, I’ll find out what their preferences are and explain to them that I’m pretty low key and won’t be moving.

If it’s a really tough scene, like somebody’s dying, I may come and do it as a set-up. I talk to the director, and once they’ve got the take, then I’ll go in and get what I need.

Q: Marvin Rush talked about the difficulties of working around authentic period lighting. How does that affect your work?

A: It’s a very subtle thing. Marvin is very good at justifying his light sources so that the viewer sees this very dark scene and sees these gas-powered street lamps like they would have had in the 1800s. The viewer is not looking at a scene saying, “How come I can see everything?” I don’t supplement his lighting. I use his lighting.