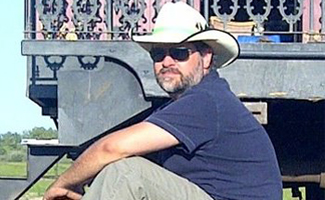 Bruce Romans, Executive Story Editor for AMC’s Hell on Wheels, talks about writing a love scene for Lily and Cullen plus how he ended up playing the “Handsome Engineer.”

Q: How does writing as a team work?

A: It’s really fun and interesting. Our show runner John Wirth will be sort of the gatekeeper for ideas but we really start from scratch. As a whole, we sit around the room and there’s not a lot of credence given to title — it’s fair game. Once you’re in the room, you’re a writer like everybody else. You start pitching ideas like: What is Cullen going to do this season? Is he going to have a love interest? What happens is people pitch ideas and those ideas lead to other ideas and then it starts to snowball. Also, the thing about being in the writers room is you have to be a little bit fearless because you have to be willing to pitch bad ideas. I truly believe a bad idea can lead to a very good idea.

A: I draw on a lot of my family and also just a lot of research, and try to wed the two to some degree. I’m from Kentucky. I grew up with an attuned ear to Southern accents, subject-verb agreement mistakes, things like that. Especially for Cullen, I can hear his voice and his rhythms. So, that combined with doing a lot of research — researching period language and reading books. We talk a lot about it in the room: Would they say this? Would they not say that?

Q: Is there a character you particularly like writing for?

A: I really like to write for Cullen, Elam and Psalms. Psalms isn’t one of the lead characters, but I feel like I’ve had a handle on him. In Season 2, I got to write a speech for him that he was delivering and I thought that was really fun. He’s sort of, in my mind, the jester of the crowd and he can say things and get away with them because he’s funny. I like writing for [Cullen and Elam], especially when they’re together, because the complexity of their relationship can come out in not how much they say, but how little they say.

Q: “Slaughterhouse” is a pretty brutal episode, from the beginning with the butcher and the pig, to the end with the McGinnes brothers hacking up the butcher himself. What was it like to write?

A: It was really fun. We didn’t want to shy away from showing how rough a place like Hell on Wheels is. Hell on Wheels in real life averaged a murder a day and there was no law enforcement. People could kill people and get away with it, people disappeared, people were shot. We thought that episode might be a good way to support that theme of how dangerous Hell on Wheels could be by having a character that enters into the fray and the danger of Mickey and Sean possibly getting hung.

Q: Were you excited when you found out you’d be writing the episode where Cullen and Lily finally consummate their relationship?

A: That particular love scene, Jami O’Brien and I wrote together. We had a very specific idea and we really dug in and fought hard. The prevailing belief in the writing room was that Cullen should seduce Lily, and Jami and I felt that it should be the opposite. Cullen is such an emotionally crippled man that he apologizes to her earlier in that episode and that’s as far as he can go in terms of showing any affection for her. We felt like Lily knew that and she should go to him and literally take him by the hands and kiss him first. She’s in love with him and she knows that she has to take that step — she has to melt him, and eventually she does. Lily is not afraid to take risks. We thought the love scene should be true to who the characters are. I’m particularly proud of that episode and that scene especially. I thought it was lovely.

Q: Do you have any tricks to deal with writer’s block?

A: Procrastination! [Laughs] A lot of times when I’m on script, I will think about it for a while and then I’ll take a nap. The best thing for writer’s block, for me, is the deadline. The closer I get to the deadline and the more anxious I get about the script, the easier it is for me to write it.

Q: You also act in Season 2, and the name of the character you play is Handsome Engineer. Whose idea was that?

A: There’s another character in the show that we just named Young Engineer, and we had Train Engineer to differentiate between them. We were on a conference call with the director regarding the script and Jami said, “Bruce should play Train Engineer,” and I thought it would be fun. I jokingly said we were going to have to change the name to Handsome Engineer, and in the next draft of the script, I think it was Jami that changed it. The scripts got distributed and it got listed in the credits that way. It was an inside joke for the writers.

Click here to read an interview with Dohn Norwood, who plays Psalms on AMC’s Hell on Wheels.