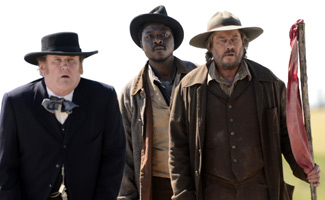 This week, The New York Times and other major media outlets report on Hell on Wheels’ new Saturday time slot, while Dohn Norwood gets upped to a series regular. Read on for more Hell on Wheels news:

• The New York Times covers AMC’s announcement that Hell on Wheels will premiere on Sat., Aug. 3.

• The Hollywood Reporter calls the move to Saturdays a play “to capitalize on the success” AMC has had on Saturdays with reruns of classic Western movies. Entertainment Weekly asks if Saturday night is the new Sunday.

• In more casting news, Dohn Norwood (Psalms) has been promoted to a series regular for Hell on Wheels Season 3, according to Deadline.

• Catch a glimpse of Common in the trailer for Now You See Me (courtesy of Screen Rant), which opens May 31.

• Bloody Disgusting reports that a film starring Colm Meaney has undergone another name change, to Where the Devil Hides from The Devil’s Rapture (from The Occult).