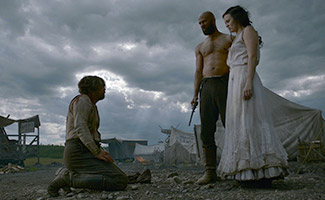 Marvin Rush, Director of Photography for AMC’s Hell on Wheels, compares the series to Star Trek and breaks down the show’s signature shot.

Q: You’ve spent a lot of your career working on Star Trek. What attracted you to Hell on Wheels?

A: It was an audacious mission to build a ribbon of railroad across a very hostile land, much like going through space… The people who did it had grit and determination and were willing to work under difficult circumstances. It was called “Hell on Wheels” for a reason, so that was intriguing for me. And also, even though it’s a Western, it’s a genre that’s not a contemporary time. So, I had spent a lot of time doing genre shows, and I liked them, and I had never done a Western before.

Q: Are there any similarities between shooting scifi and a Western?

A: Well, I’d probably be straining to find a connection there. I’ll tell you the thing that’s interesting about lighting a Western — and really it’s an interesting problem and dilemma to face — in that time, there’s no electricity, so there’s no electric light. There’s only two kinds of light in this world: There’s sunlight and moonlight, and then you have to light something on fire… Candles, lanterns, and firewood, you know that’s it. So the color palette is very interesting.

Q: How do you work around the fact that there’s essentially no electricity in Hell on Wheels?

A: We use real lantern sources and then we augment it with the movie lights, but we are extremely scrupulous about making sure that the sources are true. In other words, the light comes from the same direction as the practicals. But in some scenes we have very little light. There was a scene with Lily in the last episode where her and Common’s character are sitting together, and she has a gun under to the table pointed at him, and she pulls it out and shows it to him. Well, that was actually honestly, truly lit by one candle… It’s because we’re using some amazing new technology that we shoot with that we are able to work in that level of light. But it’s pretty breathtaking.

VIDEO: Inside the Season 2 Finale

Q: How has Calgary’s finicky weather affected your approach?

A: You get at least four or five different day lighting conditions almost every day… So, shooting in that very changing light condition and having to make the scenes match is challenging. Always has been, but we’ve found ways to outsmart the problem. We’ll shoot the wide shot and then, if the lighting conditions change, we’ll go into coverage, and do some close-ups… And when you see mud and you see rain and you see people slogging, that’s real and the crew is doing that as well… One time I was walking across set and my boots were in and out of mud puddles that were almost to the tops of my boots, and the boots were mid-calf, so 14 inches of mud.

Q: What techniques do you employ to play up the show’s grittiness?

A: I’m a big fan of the kind of stream-of-consciousness handheld where the camera has the ability to pan about and look at things, and travel around a little bit with the actors, and kind of do a dance… There’s a scene where Cullen discovers that The Swede has betrayed him, and he comes in and basically knocks him out. And that’s also a scene where the camera was very much participatory, as if the audience were a person in the room.

Q: Is there a signature Hell on Wheels shot?

A: There’s a shot in the first season where [Elam and Eva] are standing and Toole is on his knees and has come to ask for forgiveness…and behind them is this really amazing, stunning sky. Common has a pistol in his right hand, and you think he’s going to kill this guy because you know he deserves to be shot…and they are off to the right and there’s a slight sense of them as American Gothic. If I had to pick one frame that’s representative of Hell on Wheels it’s that one — it’s ominous, it’s dark, the sky is amazing. And it’s got a brutality about it.

Q: What’s been your biggest inspiration for Hell on Wheels?

A: It’s so simple. I really do get to work with amazing artists. You know, it’s stunning to watch them. I always wanted to…capture what they do, amplify it if I could, and share it with an audience… Actors are the rarest of all people on Earth. [An actor] is somebody who is interesting enough that you’ll sit down for an hour and watch them work. Imagine if somebody came into your office and said they were going to watch you work for an hour, could you be that interesting, that you could hold their attention for an hour?

A: The one about the butcher, called “Slaughterhouse.” We were firing on all cylinders, and it was scary, and it was also brave. An awful lot of people are carnivores and yet we think about food we eat as if it just came in a plastic package cooked by a chef, so there’s a certain visceral quality about that episode where ultimately the brutality of what we do as a species is shown without an agenda… It’s not preaching. It’s just so elegantly put together. I loved that episode.

Click here to read an interview with Bill Ives, the Art Director for AMC’s Hell on Wheels.