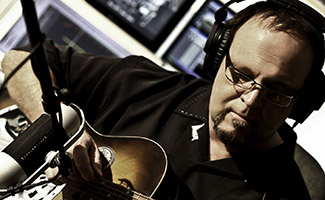 Composer Kevin Kiner, who writes and records the soundtrack to AMC’s Hell on Wheels, discusses his love of unconventional instruments and reveals why he played bass harmonica in bed.

Q: What drew you to Hell on Wheels?

A: Both Gustova Santaolalla [the composer of Hell on Wheels’ Main Title Theme] and myself were approached about it. I worked for Gustavo and it just seemed like a natural fit because they were looking for something really soloistic and similar to things in Babel and Brokeback Mountain that were very sparse and interesting while using unusual instruments to evoke a Western kind of feeling.

Q: Gustavo Santaolalla mentioned that your work was inspired by some of his Western tracks. Can you tell us more about how that happened?

A: Yeah, it definitely was. Gustavo composes a bit differently from most traditional film composers. He’ll just go into the studio and just record a bunch of tracks that he’s inspired to record… Sometimes from a story or a script or just an idea. And a lot of those tracks were the genesis for what wound up being the score to Hell on Wheels.

Q: You’ve composed music for scifi TV shows like Stargate and Star Wars: The Clone Wars. How would you compare working on those to Hell on Wheels?

A: It’s an enormous change… I’ve never used any of this kind of instrumentation on any of those other shows. It’s a different philosophy [on Hell on Wheels], a minimalist philosophy, using negative space and very sparse instrumentation… Everything is performed live, and I play all the instruments on the soundtrack. There’s nothing synthesized.

Q: Walk through a typical episode of Hell on Wheels: Which sounds are you responsible for exactly?

A: All of the music is recorded and composed by myself, so from the very beginning of the show we’ll have something that’s pretty dramatic that requires music… At the beginning of an episode, I may lay down, like, a Tambur track that’s just a drone, and then I’ll go back and I’ll put something like an Oud, which is an Egyptian instrument… Or, if it’s an action scene, I might score drums onto it… I have authentic Native American drums that I use. A lot of things like that I get from traveling around the world. It drives my wife crazy because by the end of the trip, I have a bag full of toys that I bring back and make noises with.

Q: Would you say you’re going for a more unconventional Western sound on Hell on Wheels?

A: It’s a Western, so it should be evocative of what a Western would sound like, but where we’ve gone off the track is we don’t usually use typical instruments that you would associate with an Western. Obviously they never played Oud in the Wild West… That might strike people on a subconscious level. Like they’re not really saying, “That’s not a banjo,” but there is something unusual about it. For the most part, it’s a fairly dark tone that the show evokes.

Video: The Meaning of the Railroad in Hell on Wheels

A: The pre-existing music is chosen from the producers from a number of selections… We have similar philosophies, music supervisor Linda Cohen, Gustavo, and I, in terms of what we like and what we think serves the show well… But I don’t, like, open up a Mumford & Sons track and say, oh, I’m going to do something like that, or Beck — we used Beck last season — he’s not influencing my score. [Laughs] It just works well because philosophically it’s all similar.

Q: What are some of your favorite musical moments from the show?

A: There’s a scene where Durant is in his train car and he’s ruminating about something and all I do is play kind of a sweet melody over his soliloquy, if you will. The fact that there’s only one instrument playing it… I’m playing the mandolin, and I tuned it down, so it didn’t sound like a conventional mandolin, and just by having that solo instrument, there’s a real loneliness to the scene.

Q: How challenging is it to create an original score for each episode and in a short amount of time?

A: I’ve worked doing this for along time. I think my best writing is when I write quickly. I don’t have time to over think things. A lot of composition for me is improvisation, so I’ll just sit down with a guitar or an Oud or a Greek bouzouki or whatever it is and I’ll just come up with a lick, a little motif that pleases me.

Q: Director David Von Ancken told us that he likes first takes. It seems that Hell on Wheels has this…

A: Kind of spontaneous vibe to it. I completely agree with that… I obviously can’t be a master of all of these instruments. In fact, no one can. I’m going to goof up… I always try to take my first take if I can because that’s where the spark was first lit, and I think that’s where the flame grows hottest.

Q: What can we expect from the music for Season 3?

A: The bass harmonica is the new instrument for Season 3. I had to go out and find one. You can’t really rent one, and there aren’t really a lot of guys around town who can play them. So, I’ve been working on it for quite some time, driving my wife crazy playing bass harmonica in bed trying to learn how to play the darn thing… It’s going to offer a lot of new territory for us because there’s just a lot of human grunts and groans that I’ve been able to kind of come up with that I think are going to be really interesting.