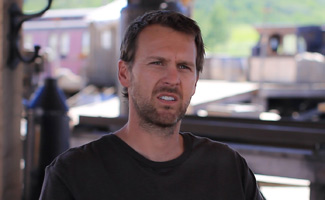 Bill Ives, the Art Director for AMC’s Hell on Wheels, breaks down the show’s aesthetic and explains the anatomy of a train crash.

Q: Hell on Wheels is committed to historical accuracy. How does that inform your work?

A: We’ve always said from the beginning that we want to be as historically accurate as we can, but we’re also not making a documentary. We’re as true as we can be, but we certainly take liberties with it. We’re really good with our set decoration and props department — they’re always spot on — but some of the materials that we end up using in construction may or may not be exactly right.

Q: How would you describe the aesthetic of the Hell on Wheels set?

A: The first season kind of played out really interesting where the location that we used was super-muddy… It was sort of hard to even handle materials. Just moving stuff from one place to another, it would almost end up distressing itself and aging itself… So we tried to follow that in the next two seasons, where it’s really down and dirty.

Q: It’s pretty unique to work on a show where the sets change so drastically from season to season. How have you adapted to those challenges?

A: We get to start from scratch just about every year. That part’s the best for all of us… For the pilot, we had a really accurate Hell on Wheels sort of town, where it’s all canvas and it looks like it moves really quickly… Then in Season 2, they got stuck in front of the trestle bridge, and the town ended up building up while they were waiting to have that built, and that would have been one of the typical towns that was left behind.

VIDEO: Locations and Sets of Hell on Wheels

Q: Did you have any input in the decision to add more permanent fixtures?

A: We’re always coming up with new ideas and concepts of buildings and layouts, and if it inspires the writers, that’s great. Last year, we ended up building a train trestle and…in the design we had this “Steam Donkey” winch used on the top of the trestle to pull each piece of the trestle structures up. The writers ended up liking it so much that they wanted it to be a player. So there’s an episode where The Swede ended up sabotaging the Steam Donkey.

Q: How did you decide which buildings went where, and what to include on the main street in Season 2?

A: Everyone needs food, everyone needs shelter, and everyone needs the basics. We had a carpenter shop, and all the buildings would have come from those guys. And we had the railway office because we needed a hub for Durant and all the inner workings of the railroad… When it’s still small, it’s just the necessary things that go up first.

Q: The town was burned to the ground at the end of Season 2. Did you actually burn down your sets?

A: We only burnt the railroad office to the ground… The rest of it, we took the buildings off the set and burned a bunch of lumber. We actually ended up framing up some walls and starting them on fire and putting them out, and then setting them up as burnt walls.

A: The favorite one for me is the locomotive, and we’ve done two now. The second one quickly overtook the first one as my favorite because it’s fully built out of metal and it’ll live for a long time. We had all the plans for the Union Pacific No. 119 train that we based it off. We had a machine shop cut all the pieces out, and we built it from zero, basically.

Q: Your team builds almost everything from scratch, oftentimes on short notice. What’s the strangest thing you’ve been tasked with building?

A: In Season 1, the [writers] thought about doing a train crash… So we ended up building pieces of our original locomotive, and because it buried itself into the ground, we only had to build the top half… We took one of our existing cars and laid it into a ditch with some of our earth-moving equipment, and then the flat deck, we just built broken pieces of it and laid it in place… So we ended up building a whole train crash sequence that looked pretty good.