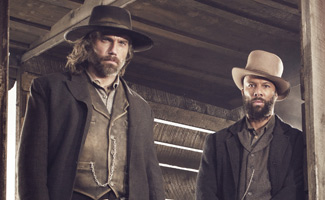 This week, Anson Mount takes to the stage in Singapore, while Common discusses the work of his charitable foundation with the Chicago Defender. Plus, a movie starring Mount that was made seven years ago will finally get a wide U.S. release later this year. Read on for more Hell on Wheels news:

• Anson Mount is starring in the Singapore Repertory Theatre’s production of Venus in Fur, according to TODAYonline.com.

• Common talks to the Chicago Defender about a new initiative where a portion of the sales of art-inspired cell phone cases go to the Common Ground Foundation, which benefits 13- to 15-year-old kids.

• The Daily Blam! reports that All the Boys Love Mandy Lane, a film starring Anson Mount that was first screened seven years ago, will be released this summer.