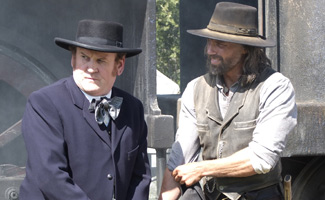 This week, TV Fanatic praises Anson Mount’s performance in ABC’s Red Widow, while the BBC takes notice of Colm Meaney filming a movie in England. Plus, Tom Noonan is called a “standout star” for his work in a short film. Read on for more Hell on Wheels news:

• Breitbart.com praises the cast of ABC’s Red Widow, noting that “[Radha] Mitchell and [Anson] Mount are especially powerful in their portrayal of a couple whose marriage on the rocks.”

• BBC has photos and video footage of Colm Meaney shooting a film, The Alan Partridge Movie, in Norwich, England.