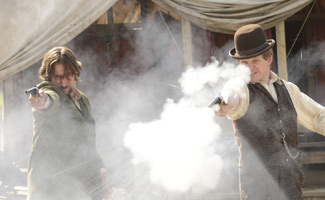 Brian Kent, (armourer for AMC’s Hell on Wheels) speaks to AMCtv.com in this interview about Anson Mount’s impressive cylinder swap and the importance of respecting firearms.

Q: Can you tell us about the main duties of an armourer?

A: As an armourer, when I receive a script I visualize how the shot is going to play out and what kind of ammunition and supplies we’re going to need. I look at the actors to make sure we have appropriate firearms that they’re cast as having, and then we have a back-up. In case something happens, we can swap out the gun and make sure there’s no hold-up in the filming and production.

Q: How do you decide which character gets which gun?

A: Sometimes it’s written into the script and we try our very best to accommodate. Most often, I’ll come up with a couple of examples that I think would be period correct. [Prop Master] Ken Wills and I go and take the guns to the actor and the director, and between the collaboration between the four of us, we come up with a gun that’s suitable.

Q: Tell me more about The Swede’s “Beauty.”

A: It is a side-by-side percussion shotgun, and it’s a period shotgun. It fires two rounds out of either one of the barrels. It’s very short in length and it has great personality somewhat like The Swede himself. Him having a classic piece like this just fits in with his character so well.

Q: Cullen had a Griswold in Season 1, and a Remington in Season 2 (which Anson admitted to preferring). Which do you prefer and why?

A: The Remington is a much more interesting gun than the Griswold. The Griswold was something that the writers came up with and it was a hard firearm to duplicate; there were such a small number made. The Remington 1877 is just a really interesting piece. It works well, it’s got a top strap that makes it a little stronger to use, it has a great look, and Anson Mount really handles it well. Last season, he did a cylinder swap with that particular firearm in the big shootout scene with the Confederate guys that were robbing the rail station. Anson practiced and practiced and could do it without looking. We worked with him and showed him how to do it and he grabbed the bull by the horns.

A: I’ve worked with numerous actors over the years and I don’t try to teach them 12 different things. If I have an actor that’s not a gun-person, but they have to be portrayed as a gun-person, what I teach them very well is maybe two or three things to do that makes them look like they’ve been handling guns all their life. We also take the main actors to the gun range and I let them shoot live ammunition under very strict circumstances. It gives them a higher respect for the firearm.

Q: Which is your favorite Hell on Wheels gun?

A: That’s a hard question! I really like The Swede’s little shorty shotgun. I went looking for that and made it up especially for him. I also have a real liking for the Ethan Allen side-by-side pistol that Colm Meaney’s character uses.

Q: What are you most looking forward to in Season 3?

A: The crews are fantastic people. Over the years, we’ve done a lot together so I get to work with my friends. The Western genre is very interesting to me, it’s such a fascinating period of time in our history. Here I am, an older man, playing Cowboys and Indians — it doesn’t get any better than that!

Click here to read an interview with Ken Wills, prop master for AMC’s Hell on Wheels.