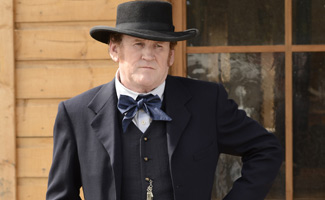 This week, Variety reports on Colm Meaney’s newest film role, and Christopher Heyerdahl is set to guest-star on an episode of a popular ABC series. Plus, Meaney is up for an Irish Film & Television award this weekend. Read on for more Hell on Wheels news:

• Variety says Colm Meaney has joined the cast of The Alan Partridge Movie, which has already started shooting.

• Examiner.com has a photo of Christopher Heyerdahl‘s appearance guest-starring in an upcoming episode of ABC’s Castle.

• Dublin’s entertainment.ie reports that Colm Meaney is one of the A-listers expected to attend the Irish Film & Television Awards ceremony this weekend, where he’s up for a Best Actor award for his role in Hell on Wheels.