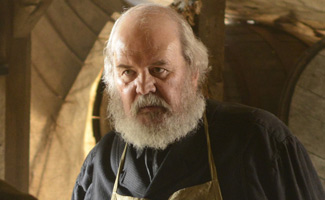 James Dugan, who plays Carl (the bartender) on AMC’s Hell on Wheels, talks about what he has in common with his character and his scenes with Common.

Q: You taught drama at the University of Calgary. What do your students think of your role as Carl the Bartender?

A: I’m retired, but I’m still in touch with many of my students. And they were very excited and very proud, and would say to other students, “Hey, Jimmy here, you know, is on Hell on Wheels!” They are always impressed when their teachers actually work. [Laughs]

Q: Did you construct any kind of back story for Carl?

A: The first thing I did was I made up a back story. I decided that he was Southerner who had owned a little tavern that was destroyed and burned down by the Yankees. So, after the Civil War, like many displaced Southerners, he got the first job he could on the railroad.

Q: How do you think you’ve managed to make a bartender into such a memorable character?

A: I spent a lot of time with the script…thinking about each scene and the character and what my attitude was toward that character. Carl really liked Bohannon,  — he really respected him because not only were they fellow Southerners, he spoke to me when he came in the bar. That’s something that Anson just added.

Q: Do you have any bartending experience yourself?

A: In my freelance actor days, I supported myself as a bartender with two different jobs in Toronto. Carl is friendly with the customers, which I could relate to, and I think my experience made it feel comfortable pouring drinks and chatting people up for the role.

Q: You have some fun scenes with Common in Season 2. What’s it like working with him?

A: My character didn’t like the Freedmen because I was a Southerner, and I especially resented Elam, which was Common’s character, even though Common was one of the nicest actors I’d ever worked with. [Laughs] We had a couple of scenes where there was a lot of tension between us. He appreciated being given something to work against, and he was always very complimentary after a scene. I just really appreciated working with him, even though what we were trying to do was create a relationship of enmity.

VIDEO: Inside Episode 205, “The Railroad Job”

Q: Did you grow the beard for the show?

A: I’ve always had a beard, but I keep it fairly short. I let it grow long for the role. My neighbor told me recently that he preferred me with the longer beard, which surprised me, because I thought I looked really scruffy.

Q: The saloon burns down at the end of Season 2, along with most of the town. Were you there the day they filmed the fire?

A: Yes, it was amazing! It’s funny, I didn’t have any particular attachment to the Starlight…but I realized that, with the whole town burning to the ground and so many people being killed, that for Season 3 they were going to have a kind of fresh start.

Q: Other cast members have mentioned that they frequent Calgary pubs. Do you get in on the bar-hopping action with the rest of the cast?

A: Barhopping isn’t really my thing now… Not at my age. [Laughs]