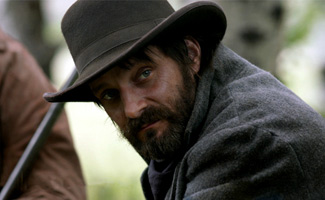 In this interview for AMCtv.com, Ryan Robbins, who plays Hawkins on AMC’s Hell on Wheels, talks about bonding with Anson Mount over 1860s weapons and the technical side of his character’s execution scene.

Q: You’ve done a lot of scifi TV shows. What drew you to Hell on Wheels?

A: I’ve always loved a good Western. I started watching the show for Chris [Heyerdahl] and got hooked immediately. It’s such a good show and AMC is an amazing network. I jumped at the chance to be a part of the family.

Q: You said on Twitter that Christopher Heyerdahl is one of your all-time favorite co-stars. Why is that?

A: Chris and I did Sanctuary together for a total of five years and we became really good friends. I always tell people that Chris was there when my daughter took her first steps. He’s just a great guy and an incredible actor.

Q: What is the training like to use 1860s guns for a show like Hell on Wheels?

A: I love history and learning how to use those particular tools, which is effectively what they are. I felt like Anson [Mount, who plays Cullen Bohannon] was the same way. We would sit down together and take the weapons apart and put them back together. It ended up being really beneficial. In that shootout in the end between Cullen and Hawkins, we ended up working it out much differently than it was written because those old pistols, you can’t just simply reload like you would now. It’s a big process.

Q: Was it your idea for Hawkins to fumble reloading his gun?

A: It was written one way, and Anson and I had talked about if there was anything we could do to make this unique, and that was idea that we came up with. Everybody really got behind it.

VIDEO: Inside Episode 5, “The Railroad Job”

Q: As a Canadian, how much did you know about the building of the Transcontinental Railroad beforehand? What was the coolest thing you learned?

A: I was very aware of the railway but there were so many details that I wasn’t aware of. The fact that the railroad was built from west to east and east to west, and was set to meet in the middle, I’d forgotten that information. There was also a completely different type of person that went west to east, and I’m very interested in what that must have been like — the meeting of all these people of different races and religions from all over the world.

Q: If you could play any other character on Hell on Wheels, who would it be?

A: I love Hawkins. If you had handed me any of the scripts and asked me to choose a character, I probably would have chosen that guy. I thought he was really interesting. I love The Swede, but there’s only one guy on the planet that can do that.

Q: Were you surprised by Hawkins’ racist language?

A: Those are words that I’ve never uttered. That’s just not in my nature at all. But we’re all very much aware that these are just characters that we play and we’re just role playing. Reading those words for the first time was a challenge, and I found myself warning my friends and my family members. But I’ve also played Charles Manson in a feature film, so I think everybody looks like a saint compared to him.

Q: Hawkins falls into an open grave after being executed. What was really down there?

A: It was an open grave and that thing was six feet deep at least. It was a long way down. But, for the record, we timed it out with what’s called a “cowboy switch” and my stunt double, Dave Hospes, went in the pit. I’m a big fan of doing my own stunts — I did all my own riding, but with stuff like that, I’m like, “Dave, okay, it’s all you buddy!” [Laughs]

Q: You play guitar. Did you talk music with Common?

A: We definitely talked a lot about music. It’s fun when you have somebody with a common interest outside of what you’re doing. I have to say that Common is one of the kindest, most humble, grateful individuals that I’ve ever met in my life. I was profoundly affected by meeting him. I think he is an outstanding human being.

Q: Were you inspired to write any Hell on Wheels lyrics?

A: There were definitely some inspired moments. I bring my guitar with me everywhere I go, and one of the camera operators there had an instrument called a “guitalele” — a ukulele-sized guitar — and he let me play it on set every day. As soon as I finished, I immediately went and bought one of my own, and now that thing travels with me everywhere.

Q: Hawkins wants to take the stolen loot and “whoop it up.” If you were to come into money, would you party or put it away for a rainy day?

A: I’ve got an eight-year-old daughter, so some of that would definitely be put away for sure. But if you come into some money, you should also enjoy some of it. We don’t know how long we’re going to be here for. So, everything in moderation, and there’s a perfect balance in this life if we can find it.