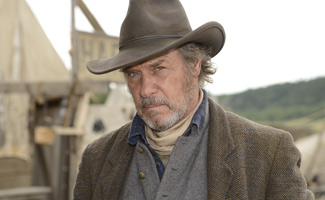 In this exclusive interview for AMCtv.com, Grainger Hines, who plays Doc Whitehead on AMC’s Hell on Wheels, reveals the gruesome details he learned about 1860s surgery and why this character “fit like a glove.”

Q: Your character was new to Hell on Wheels in Season 2. How did you acclimate yourself on set?

A: I got the vibe of the show from the moment I went into the audition, which was incredibly open and creative and interested in what you had to say and what you had to bring to the table. Starting from the first day I got [on set], I got a message from Anson Mount saying, “Hey, you want to go over a script? You want to get together?”

Q: Your character, Doc Whitehead, and Anson’s character, Cullen Bohannon, knew each other before the war. How much did you know about their shared past?

A: Anson and I both talked about it a good bit. I created a real backstory and I felt like the writers were totally open to what I wanted to suggest. I feel like Doc Whitehead had a lot of history with Cullen. I think he was the only person to call him Cullen.

Q: Doc Whitehead is a complicated character. Are you much like him in real life?

A: I am like him in the sense that I’m laid-back and kind of quiet. I think there’s a bit of all of us in all of the roles that we play. I just loved this character. He just fit like a glove for me. It doesn’t come around that often that you have a character that feels like putting on clothes that are made for you and they just fit perfectly.

Q: You and Anson are both true Southerners. Did you bond over your Southern roots?

A: Being a true Southerner, there’s a shorthand. Anson and I didn’t have to talk a lot about it, and we kind of understood each other. Being from the South is something that I’m really proud of. I can be back in the South for a week and I’ll forget any training I had, and all the Shakespeare. I’m back there and I’m, “Hey y’all. How y’all doing?”

Q: Your character got to be in shootouts and robberies, and to treat gruesome gunshot wounds. What aspect of your time on Hell on Wheels was the most fun?

A: I have horses myself, and I play polo all the time, so riding for me is such a joy. I love being around horses. Whenever we would go back to base camp, instead of riding in the van, I would ride with the wranglers over the hills and get back to base camp that way. I just loved being up there and being in wide open spaces where there wasn’t a sign of civilization.

A: It did, because I did a lot of research about Civil War doctors. Doc Whitehead was a battlefield surgeon, and I read a tremendous amount of stuff on the internet about surgeons in that time. My medical kit was nothing but a scalpel and something that you’d just jab down into someone’s wound to try and find a bullet and it’d hit metal on metal. How much death and blood and destruction would a doctor have seen?

VIDEO: Inside Episode 6, “Purged Away With Blood”

Q: The scene where Cullen carries out Doc Whitehead’s execution is quite emotional. How did you prepare?

A: I remember one time during that day going off by myself, and I went over and sat down on the train landing and sat there for a long time just looking at the town and looking at the hills and just thinking about the time that I had spent there. When we shot the scene, I think the most important thing was doing that walk up the hill. [Anson and I] just were quiet, and he was very delicate about the whole thing.

Q: Would you have acted the same way if you were in Doc’s position?

A: In the previous scene in the rail car, Doc Whitehead says, “I won’t let you pay the price for me running like a coward.” He wants to die with honor. And I can understand that. When you get to a certain point where there’s a lot more behind you than there is in front of you, you start thinking about who you are. And I think at that point there was nothing left for him.

A: It was very weird. I started growing a beard in July of last year and…I kept it all the way through December when the film was finished. I have always been clean-cut, and then I had this beard, and all of a sudden I was in Hell on Wheels. It was kind of a coincidence, but I love that era. In Lincoln, I was a very different character. I was a very refined character; I was from Connecticut, Secretary of the Navy. And then to play a Southerner in the confederacy — it was just a great segue.