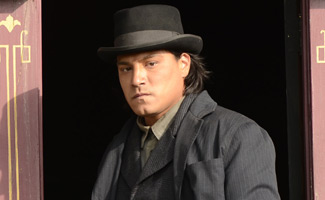 In this exclusive interview for AMCtv.com, Eddie Spears, who plays Joseph Black Moon on AMC’s Hell on Wheels, talks about his character’s return to the Native world and his personal connection to Tom Noonan’s death scene.

Q: Your character survived another season. Do you think you would have lasted as long as Joseph in Hell on Wheels?

A: I’m glad he’s lasted this long! He’s a character that I want the audience to root for and relate to, so I’m glad that Joseph’s surviving and leaving the audience curious about what’s going to happen next.

Q: What did you think of your character’s decision to go back over to the Cheyenne — and the particular act that motivated it?

A: Once he got his heart broken and he didn’t have any business in Hell in Wheels, I think it was inevitable that he was going to turn back to his people, or at least turn back to his way of life, of living on his own and living off the land.

Q: Your character kills his adopted father, Reverend Cole. Tell me about shooting that scene…

A: It was difficult because the weekend before we shot that scene, I lost my father… so there was a lot of emotion brought up and I just used it for the character. It was tough. I hated to see Tom [Noonan] go. I really looked up to him as an actor, and he was one of my father’s favorite characters.

VIDEO: Inside Episode 206, “Purged Away With Blood”

Q: You’re Lakota. Did you consult with the crew to make sure Joseph’s return to native life seemed authentic?

A: Yeah, and I want to make it believable as well. When I showed up to wardrobe on the first day after Joseph goes back to being Native, I was like, “Um, I don’t think he would have this because where would he could get this?” And my loin cloth was a little too small and things like that. I asked for stuff like a trade cloth and a shirt and some beavers. Just the stuff that was close to him, stuff that he already had, stuff that his father gave to him like his knife. He didn’t have a lot of time to get feathers and a lot of other things that the other Natives had because of being caught between both worlds, so I thought that his regalia would reflect that. Where would he even get leather, unless he had time to kill animals and scrape hides?

Q: Last season you said that your family liked the way Hell on Wheels portrays the clash between whites and Indians. How have they responded to Season 2?

A: They like the transition, Joseph going back to his people. My mother was like, “I like that you’re going back. And I like your costume too. It looks good.” [Laughs] My brother wouldn’t let me live it down when my opening scene was a love-making scene. They were giving me a hard time about it, but they liked it. They felt like it was the only innocent relationship that was going on. They were heartbroken when Ruth turned down Joseph.

Q: Joseph faces new prejudice in Hell on Wheels when people find out about him and Ruth. Have you ever dealt with that in your own life?

A: There were fights in school when I had long hair. I got teased and called a girl. But you get through that, and it’s just ignorance I think. And then later on I became friends with those kids that were starting those rumbles.

Q: You’re a pro at riding horses and shooting bows and arrows. Do any of your co-stars ever ask for assistance on their stunts?

A: Some people think that all Indians are amazing horsemen. There’s a lot of great riders on the show and you don’t have to tell them anything, but there were other riders that were falling off or getting bucked off or getting scared. You have to show your horse what he needs to do, so then he’ll do it for you. And don’t be afraid to hang on!

Q: You started your career at the age of ten. What initially attracted you to acting?

A: My brother Michael was already in movies, and I loved being on set and riding horses and seeing people get shot off horses. I was like, “I want to do that!” But then once I got my first speaking role, I was bit by the acting bug. I wanted to break the mold and have an actual Native American playing a Native American, and show my friends and family and other Natives out there that you should pursue your dream.

A: I want to produce and direct. I’ve been writing, and have a few scripts in the same genre that I want to do. I like Westerns and horrors and mystical movies with creatures and magic and stuff like that because there is a lot about Native folklore that people don’t know that I would like to share with the world.

Click here to read an interview with Tom Noonan, who plays Joseph’s adopted father, Reverend Cole, on Hell on Wheels.