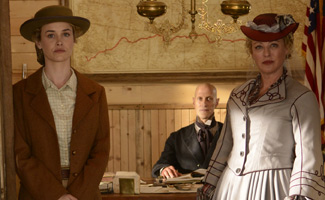 This week, Buzzine dubs Hell on Wheels one of TV’s top period dramas, while Anson Mount talks about his experience starring in SEAL Team Six. Plus, Common discusses his career with Ebony. Read on for more Hell on Wheels news:

• Hell on Wheels is one of Buzzine‘s “Top 5 Lavish Period Dramas”: “This slice of post-Civil-War life is somewhat lurid, somewhat melodramatic, and a hell of a lot of fun.”

• Harvey Weinstein tells Zap2it that SEAL Team Six: The Raid on Osama bin Laden (starring Anson Mount) is “the best of The Bourne Identity meets a supergreat documentary.” Mount talks with the Albuquerque Journal about shooting the movie’s action sequences.

• Common talks to Ebony about his diverse career, including his work on Hell on Wheels.